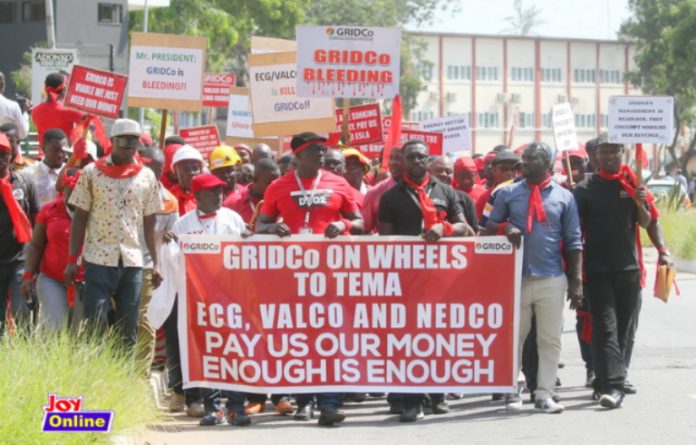 The sit-down strike would be followed by a picket at the GRIDCo Head Office at a date to be announced later by the Staff Group Leadership, the Senior Staff Association of the power supplier said in a statement.

GRIDCo runs the National Interconnected Transmission System which ensures the transmission of electricity from wholesale suppliers (generating companies) to bulk customers, which include the Electricity Company of Ghana (ECG) and NEDCo among others.

The GRIDCo staff are demanding that some GHS 250 million which President Nana Akufo-Addo directed the Finance Minister to pay GRIDCo, be paid.

The GRIDCo leadership has been pushing for the payment of these millions since the beginning of this year.

Agitated staff shelved a planned sit-down strike on December 4, 2019, after presenting a petition to the government on their grievances.

Before presenting the petition, hundreds of GRIDCo staff, clad in red, took to the streets to protest the huge debts owed them by its bulk customers.

With weeks to the Christmas festivities, the indefinite sit-down strike by the GRIDCo staff is likely to lead to power cuts or ‘dumsor’.

Previous VIDEO: How Cardi B got drunk and became wasted
Next Police arrest principal of Afia Kobi Nursing School