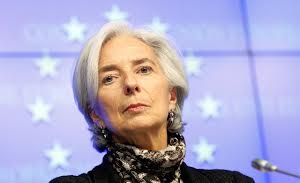 The Managing Director and Chairman of the Board of the International Monetary Fund (IMF) has resigned.

Christine Largade in a letter to the Members of the Board said her resignation takes effect on September 12, the likely date for her hearing before the Economic Commission of European Parliament.
“During the period of time until Septemeber 12, the relinquishment of my duties announced previously will stay in effect, and I will not speak, write nor make any representation in the name or on behalf of the IMF. I will offer the Acting Managing Director any help that he so requests for appropriate transition purposes,” she wrote in her letter.

This video file cannot be played.(Error Code: 102630)
On July 2, Madam Largade was nominated by the European Council to the position of President of the European Central Bank.

“I had agonised over this proposal during the previous 48 hours and eventually decided to accept,” she said.
Emotional Largade spoke about the good times she with the team at the IMF and the successes they chalked together noting “it was occasionally divided, but it was always civilised and respectful”.
Read her letter below:
Watch JoyBusiness’ George Wiafe’s interview with her last year