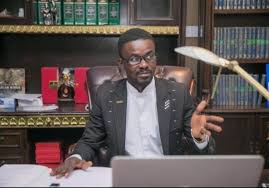 Customers of defunct gold dealership Menzgold have been assured that they will soon hear from the embattled Chief Executive Officer of the company following his release from police custody.

Public Relations Officer (PRO) of the company, Nii Armah Armatefio said Tuesday that Nana Appiah Mensah needs a few days to relax and clear his mind after a tumultuous turn of events with law enforcement agencies shortly after his arrival in Ghana from Dubai.

“He’s been in police custody for three good weeks. Now that he is gotten his freedom, I am sure that he needs to rest. So I am sure he will take some time to rest and after he will hit the road again,” Nii Armah Armatefio told Joy News.

Expectant customers whose monies have been locked up with the defunct firm had been pushing for Nana Appiah Mensah’s release, lamenting that his continued stay in police custody scuttles efforts to get their money.

A few weeks ago, they stormed the court wielded placards with inscriptions such as “23 people dead in Menzgold saga”, “suspend criminal charges against NAM 1”, “help NAM 1 to retrieve Dubai money”, “no money for school fees and medical bills”, among others.

It is estimated that at least GHS1.6 billion millionhave been locked up in the defunct investment firm that has now been dismissed as a Ponzi scheme.

The Menzgold PRO is, however, assuring customers that a press conference will soon be held to address key concerns of the customers.

“I am sure the customers will also agree that our Chief Executive Officer needs to rest a bit after which we are going to arrange for a news conference where he will speak to the media, the general public and the customers as well – where he will outline the way forward for the company,” he said.

The embattled CEO was released from police custody after he met the reviewed bail conditions, Tuesday.

Nana Appiah Mensah popularly known as NAM 1 was released after his lawyers managed to meet the bail conditions set by an Accra circuit court.

The court at its last hearing had set bail at ¢1 billion with five sureties.

But Nana Appiah Mensah remained in custody as his lawyers were unable to meet the bail conditions.

However, in court Tuesday, the presiding judge ruled that persons who have pledged to take responsibility if Menzgold CEO fails to show up in court to stand trial must no longer show evidence of owning properties worth ¢1 billion.

NAM1 has been slapped with 13 counts of defrauding by false pretences, money laundering, abetment and carrying on deposit-taking business without licence contrary to Section 6 (1) of the Banks and Specialised Deposit-taking Institutions Act.

He arrived in Ghana on July 11, 2019, where he was picked up by security operatives at the Kotoka International Airport and sent to the Criminal Investigations Department (CID) of the Ghana Police Service for interrogation after spending several months in Dubai in another legal battle.

Nana Appiah Mensah has been accused of defrauding his customers of about GHS1.68 billion.

The charge sheet indicated that Mr Appiah Mensah’s two companies — Brew Marketing Consult and Menzgold Ghana Limited; represented by him, have also been charged with defrauding by false pretence.

The charge sheet explained that the accused persons purportedly aided Brew Marketing Consult and Menzgold to defraud the customers.

Previous Tadi missing girls: Cloth, sandals of a girl was found at new body site – Eklu
Next Convict remanded for escaping from prison