Aggrieved customers of collapsed gold dealership firm Menzgold have expressed anger over what they say is President Akufo-Addo’s attempt to ridicule them over their lost investment. 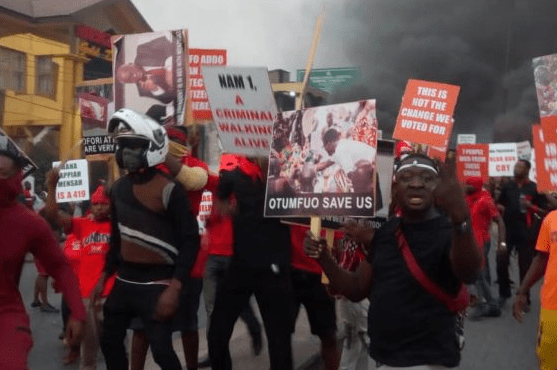 It comes after the President mentioned the Menzgold Chief Executive Nana Appiah Mensah in a speech while acknowledging outstanding graduates of the Adisadel College in Cape Coast on Saturday, where was special guest of honour for their 109th anniversary celebrations.

“I love music and it is great to know that Adisadel produced JK Amponsah popularly known as Agya Koo Nimo classical example of traditional music and the popular hiplife musician, the late Terry Bonchaka. Chairperson I have also been made aware that Nana Appiah Mensah a.k.a NAM 1 of Menzgold fame or notoriety depending on your view point is also a graduate of ADISCO. They say it takes all sorts…the ADISCO list can go on and on”, he said to cheers and boos from the students.
Reacting to the comment of the President, chairman of the concerned Menzgold customers appealed to the President to desist from ridiculing them when his government has not paid them their held up investment.
“The President has not paid our money and yet everyday they mock us. If they had paid and he is making reference to it, we won’t mind but once he has not done anything about it, why would he still be making reference to it,” he told Starr News.
The CEO of Menzgold is currently in police detention in the United Arab Emirates where he was arrested late last year over what is believed to be a deal gone bad.