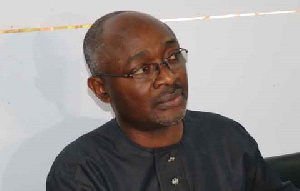 Businessman and member of the opposition National Democratic Congress, Alfred Woyome, has said he is ready to refund the GH¢51 million wrongfully paid to him, in two months, should government release shares of his company.

“Let the government release the shares of my company and probably within two months that money will be paid.” He said.

Alfred Woyone however indicated that his intention to pay back the judgment debt doesn’t stop the state from going after the matter.

According to the embattled businessman on the Face2Face show, “I went to the Flagstaff House to meet the Personal Assistant to the Chief of Staff so that the Attorney General [will meet me and] and release shares of my company so that I can pay this money [GH¢51 million]; although I have not stopped the state from going after the matter.”

He add that, the freezing of his 14 companies has rendered him jobless as he has been relying on religious organizations and some philanthropists to survive. This development according to him suggests that the state is really not interested in retrieving the money.

“I have not worked. Government has closed all my businesses against a court order. Bank of Ghana had blacklisted me causing a huge contract I had to supply items to the government for the building of the port…and that thing was taken away.”

“My consultancy work, because of the criminal case and all the pursuant things, I couldn’t [consult] for any other country.” He Alfred Woyome lamented.

Alfred Woyome has been engaged in a legal tussle with the government since 2013, after the Supreme Court on June 14, 2013, ordered him to refund all monies wrongfully paid him in the form of the judgment debt.

The businessman has since maintained that he is innocent in the matter and has tried unsuccessfully to seek redress at different courts.

In 2019, The Supreme Court ordered the sale of properties discovered by the state to belong to the embattled businessman to defray a GH¢51.2 million judgement debt paid him which the country’s apex court has ruled must be refunded.

According to the court, a claim by the now-defunct UT Bank that Mr Woyome used two of his houses at Trassaco as collateral for a loan could not be proven.

After some months, the Minister for National Security, Mr Albert Kan Dapaah, suggested that assets of private businessman Alfred Agbesi Woyome, which were to be auctioned by the state to defray some money he owes the state should be surrendered to the state to “obviate the need for an auction.”

This follows the inability of the auctioneer to sell Mr Woyome’s assets due to fears by potential buyers that the properties will be restored to Mr Woyome by future governments.