Residents of Akweteyman in the Okaikoi North Municipality of the Greater Accra Region say their health is at risk because of the persistent release of industrial waste into the atmosphere by a candy producing company, Royal Sweets Limited. 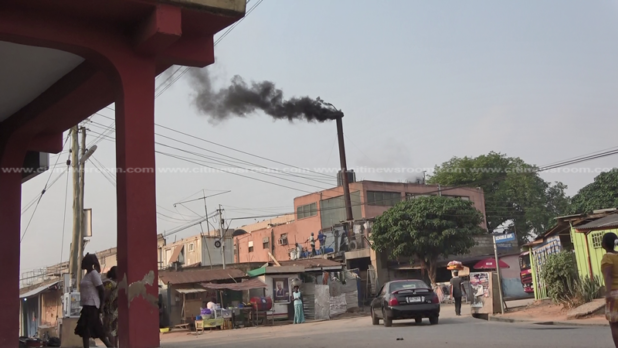 Some residents have vowed to employ any means possible to get the company shut down or be relocated.

“We cannot wait till there is an epidemic breaking out in this neighbourhood… we are taking action now,” an angry resident said to Citi News.
The residents have also accused the Okaikoi North Municipal Assembly of showing little or no concern about their plight for nearly a decade.
As the days go by, Ghana’s population keeps increasing; with an annual population growth rate of 2.5% and housing in urban areas has become just as key as educating the next generation.
But the quest for decent and safer residential neighbourhoods and the need for space for industrial manufacturing has been breeding simmering tensions at Akweteyman for nearly a decade. And the residents cannot take it any longer.
It all begun about two decades ago, when a candy production company, Royal Sweets set up its factory, at Akweteyman.
Then, the population was not as massive as it is now. Neither was the production load of the company as huge as it is today.
One of them, Barima told Citi News, he has suffered enough and as such, he plans to sell off his house and relocate.

“They operate day and night, especially around the festive season. When you sleep at night, you feel a sudden change in the breeze. Smoke fills the room directly. Myself, my wife and child have suffered heart problems. I am just recovering. So I have decided to sell my house and relocate. We are simply inhaling death,” he lamented.

One Eric Akwetey’s great-grandparents were the early settlers at Akweteyman.
He now operates a pub and a restaurant that is almost on its knees since his clients cannot stand the fumes they have to inhale from Royal Sweets.
Eric has been leading the residents here to get authorities to intervene since 2009.
He says he and his fellow residents are frustrated and are compelled to help themselves.

“It has affected me gravely to the extent that the place is empty. This morning not even one person has come for breakfast because the emissions this morning were enormous and when it happens that way, customers cannot sit down and enjoy themselves,” Eric complained.
Authorities of the Okaikoi North Municipal Assembly were unavailable for an interview as at press time.
Managers of Royal Sweets also angrily rebuffed attempts by Citi News to get a response to the resident’s complaints.
Concerns over air quality
The World Health Organisation (WHO) has warned that air pollution-related deaths are expected to rise in Ghana as urban population and vehicular numbers increase.
Statistics from the WHO reveals that air pollution kills 28,000 people in Ghana annually.

The British High Commissioner to Ghana, Iain Walker had cause to complain about the air quality in Accra.
He described it as disgusting and disgraceful the way and manner some unknown persons have been indiscriminately burning car tyres polluting the air around his home.
Resident agitation over pollution
Residents of East La in the La Dadekotopon Municipality threatened legal action against the Environmental Protection Agency (EPA) and the La Dadekotopon Municipal Assembly (LADMA) because of the operations of plastic manufacturing company, EDISAW Company Limited.
Residents complained that the operations of EDISAW posed a serious health risk to them.
The EPA had cause to shut down the company for because of the pollution, but the company resumed operations.
Residents of Kuntunse in Accra also threatened to head to court in a bid to stop the unlawful operations of a tomato factory in the area.
The EPA held a meeting between management of the factory where the company was directed to move its operations to an industrial area
Another company, Shinefeel Ghana Company Limited at Asutsuare, was compelled to halt its plastic processing unit after complaints from the public.
An EPA team concluded that the plastic unit of the plant was not observing the agency’s standards.
This was after the Osudoku SHS closed down due to the emissions from the factory, now confirmed as harmful.
–
By: citinewsroom.com | Ghana