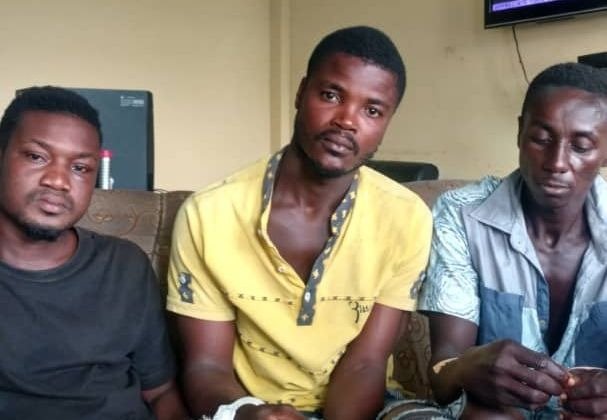 Police in the Eastern region have arrested three persons who allegedly robbed a fetish priest and subsequently kidnapped his son and his driver.

They are among a gang of eight criminals who attacked the home of Emmanuel Sarpong, a fetish priest at Tei-Nkwanta, a suburb of Koforidua last Saturday and robbed him of his properties.

According to the Regional Police PRO, DSP Ebenezer Tetteh, the fetish priest who is popularly known as Nana Hiamankyene had travelled on the day of the incident.

Upon his return, he reported that the suspects broke into his room, assaulted occupants of the house and kidnapped his son, Eric Amponsah, 34 and his taxi driver, Enock Addo, 26.

He said they made away with his 42 inches Nasco flat screen television set, three sound speakers and one sound power amplifier and an amount of ¢14,000.

The suspects also took away his taxi cab with registration number ER 418 – 16.

The suspects, according to the complainant, called him and demanded ¢40,000 ransom before they would release the victims.

The robbers succeeded in getting ¢700 after they forced Mr Addo to call his brother to send money before he would be released.

Despite getting the money they failed to release the victim.

DSP Tetteh said at about 6.30 am on Sunday, officers of the police Criminal Investigations Department and Counter Terrorism Unit acted upon intelligence and stormed the Ayisikrom forest, near Nankese in a rescue operation.

Prior to that, the robbers had renewed their demand for more ransom from the complainant. This time the amount had been negotiated to ¢37,000.

DSP Tetteh said during the rescue operation, the suspects abandoned the stolen taxi cab in the forest.

According to him, the police team with the assistance of some village folks chased and arrested two of the suspects, Kwadwo Asare, 22, and Fatawu Lukeman, 27, but the remaining six managed to escape.

The kidnapped persons were then rescued and the stolen items were also retrieved.

On Monday, the police arrested of 33-year-old Felix Yaw Tettey, a third suspect from his hideout.

Asare who sustained injuries during his arrest, is under strict police guard at the Koforidua Regional Hospital where he is receiving treatment.

The suspects told the police after their arrest that they were recruited to undertake the operation by their leader who is called ‘Igboman’.