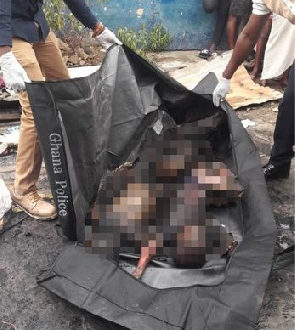 Three girls have been burnt to death in a fire outbreak at BBC, a suburb of Tema.
A wooden kiosk caught fire in the area, resulting in the untimely death of three girls, DGN Online gathered.
The children were identified as Bridget Delali Hammond, aged 10, Winifred Hammond, aged nine and Parisah Adewumi Hammond, a two-year-old Kindergarten pupil of Mexico Primary school.
They were said to have closed from school and decided to have a nap in the wooden structure where they reportedly usually sleep in the afternoon.
According to an eyewitness, the two-year-old was heard calling for help which attracted people to the scene.
“We did not hear of Bridget and Winifred, who are in the same primary school in class 4 at Don Bosco School, and were also sleeping in the kiosk when the incident occurred,” a witness said.
The incident, the witness indicated, started at about 3:30 pm but everyone around could not to stop it from spreading.

Parents of the children and some ran out of the house in search of help from neighbours when the fire started, but efforts made to retrieve the children were not successful as the kids were trapped and burnt to death completely.
The charred bodies of the children have been deposited at the Tema General Hospital morgue for preservation and autopsy.
Divisional Officer (DO) 1, Timothy Effum, Deputy Tema Regional Commander of the Ghana National Fire Service told DGN Online via mobile phone that they received a distress call in the late hours of Thursday that there was a fire outbreak.
“Upon receiving the information, we quickly dispatched a fire engine to the scene to bring the fire under control. Whiles doing what we term as overhaul, we discovered three bodies, all of them girls and children,” according to DO1 Timothy Effum.