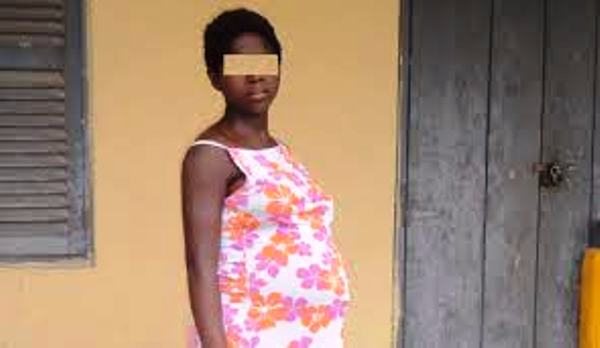 He allegedly had sexual intercourse with his stepdaughter several times in the bush.
The man reportedly fled on Wednesday dawn after a complaint was lodged against him to the police at Tease.

In the presence of the chiefs of the town, he reportedly admitted that he had sexual intercourse with his stepdaughter, resulting in pregnancy.

Okyeame Kofi Twum, linguist of the farming community, disclosed on Nkawkaw-based radio station Agoo FM that the victim’s mother, Anty Yaa, reported to the chiefs that the husband had impregnated the stepdaughter.
According to the linguist, the victim’s mother said her daughter usually accompanied the father to farm and in the process the suspect took advantage of the girl and had sexual intercourse with her in the bush on several occasions.

The Okyeame said the mother observed that her daughter had missed her menstrual period and subsequently noticed that she was pregnant.
He added that the girl told the mother that the stepfather was responsible for the pregnancy.
According to her, she confronted the husband over the pregnancy after several denials before proceeding to the chief’s palace to report the matter to them since in her view it was an abomination.

The Okyeame said when Kwabena Asiamah appeared before the chiefs he admitted having sexual intercourse with the stepdaughter and the issue was immediately reported to the police.
Mr. Asiamah reportedly fled when he got information that he was going to be arrested by the police.