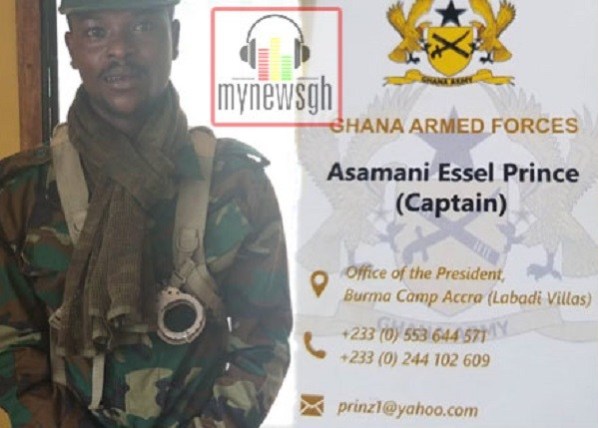 A self-styled Captain of the Ghana Armed Forces in fully dressed military uniform who claims to be working at the Jubilee House, the seat of government has been arrested by the police with dried leaves suspected to be Indian hemp.

Captain Asamani Essel Prince upon his arrest by the police also had in his possession one Jack knife, a pair of handcuffs, one bayonet, a number of military recruitments forms and first aid box containing 2 lighters.

According to the Kokrobite District Police in the Greater Accra Region who confirmed the incident to MyNewsGh.com, at about 2:30pm on Saturday June 22, 2019, a police patrol team was returning from duty and on reaching Aplaku met the suspect driving a white Mitsubishi Gallant Saloon car with registration number GW 7991-12 towards old barrier.

The suspect on seeing the service vehicle tried to hide, heightening the suspicion of the police about his true identity.

The police chased and arrested him but he could not tell his unit even though insisted he was a serving military man.

A search on him revealed ten complimentary cards bearing his name as captain of the Ghana Armed Forces who works at the office of the president thus Jubilee House.

Upon further interrogation he denied being a military Officer contrary to earlier claims.

He is currently in police detention and would be arraigned before court this week.