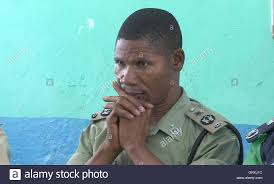 Children of Assistant Commissioner of Police (ACP) Dr. Benjamin Agordzor, including his 17 year old daughter broke down and wept bitterly when they finally got to meet their father inside the cell of the Bureau of National Investigation, MyNewsGH.com learnt.

State prosecutors are alleging that ACP Dr Agordzor drafted a protest speech for a group that was allegedly scheming to take over the reins of government illegally. He has since been put before court.

The wife of the ACP said their children have been traumatized by news of their father’s arrest, disclosing in interviews that the 17 year old girl among the children could not hold back her tears when she saw her dad.

Mrs Patience Agordzo speaking to Neat FM said their daughter thought she was meeting her father for the last time.

“She asked me, mum, will they kill my father?” Mrs Agordzor recalled.

“Our children didn’t know what to say when they saw their father on Tuesday. They are so down that they cannot utter a word with the guys crying like girls. The girls who are also in school called and began asking questions if their dad is going to be killed…It is very sad.” She added.

ACP Dr Agordzor was arraigned on Wednesday over the charge of abetment to commit treason felony.

I am being targeted

ACP Agordzor told journalists outside a courtroom in Accra Wednesday that he would not allow the “frivolous” charges which he said were trumped up by the state, to weigh him down in his criticisms.

“These charges are frivolous. I’m strong as anything. I’m not going to be bogged down, nobody can gag me. I have not committed any crime; I’ve done nothing wrong,” he said after a brief court appearance Wednesday.

ACP Agordzor who is the Director of Transformational Programme Office at the Ghana Police Service was arrested Monday afternoon. He has been charged with abetment to commit treason.

He expressed surprise that he is being ‘targeted’ for expressing his opinion on a social media platform when the President, Nana Akufo-Addo in his inaugural address on January 7, 2017, asked Ghanaians to be citizens and not spectators.

Tags after agordzor bitterly children inside seeing their