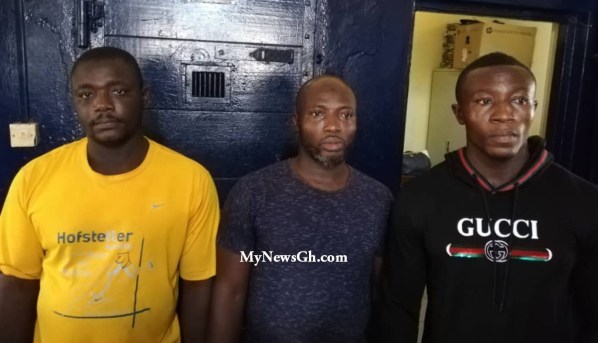 Three members of the pro-National Democratic Congress (NDC) group in Ashanti Region “ the Hawks” who surrendered themselves to the police in Ashanti Region following shooting incident which occurred at the regional NDC office months ago have been granted bail by a Kumasi High Court, MyNewsGh.com has confirmed.
They have been granted bail in the sum of GHC100,000 with two sureties to be justified.
On February 18, 2019 there was an attack at the Ashanti Regional National Democratic Congress (NDC) office in Kumasi which left one dead and another injured.

The Ashanti Regional Police declared 13 persons wanted over the shooting and killing at the National Democratic Congress’s (NDC) party office in the region including   one Sani Mohammed alias Commando, Wayo, Element, Jah Rule, as well as Petit, Akon, Fayiz, Mallam, Rock, Hussein Barri alias ‘Warrior’, Midjima, Damos and Abu Taliban.
Three of the wanted suspects, Wayo, Rock and Petit voluntarily surrendered to police according to the Ashanti Regional Police PRO Godwin Ahianyo until they were granted bail on Tuesday.

Previous Rastafarians call off May 8 ‘weed demo’ after court injunction
Next Landcruiser sirens of Ministers, MPs and others scaring police –Kofi Kapito