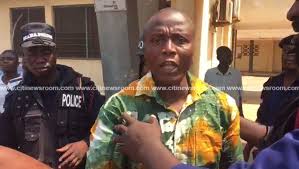 The suspect was granted bail in the sum of GH¢500,000 with two sureties to be justified and is required to be reporting to the police headquarters fortnightly until the final determination of the case, MyNewsGh.com has also confirmed.
Mr. Afoko has been in detention for close to four years facing trial until the Attorney General’s Department on Monday January 28, 2019 filed a “nolle prosequi”, which is a decline of interest in the case and later rearrested the suspect to be charged alongside one Asabke Alangde.

The move did not go down well with the accused who descended on the police prosecutor at the premises of the Accra District Court where he made his first appearance after trial.
He accused him of deliberately polishing lies and embellishing them just to have him jailed wondering what his motivation is for embarking on such a path.

A livid accused person also took on the Ghana Police Service for being dishonest in the discharge of its duties by piling false accusations on him as though he indeed committed the act when they themselves brought in 14 witnesses who have all failed to prove the charge.
“This man was there, 14 witnesses withdrawn and you are still polishing those lies. They are wicked…I have not done anything. I have not plan with this boy to do anything. Why do you treat me like this…it is bad? You can treat human like this. Be honest to yourselves this country…police be honest you are lying. Stop the lies. Am I killing Adams to take his trousers or shirt? Why do you people like twisting the story…Oh Ghana it is a shame”.

Family of the accused has meanwhile welcome the latest decision by the court describing it as heartwarming in the mist of claims the accused had been maltreated by the police prosecutor, one Detective Chief Inspector Augustine Nkrumah handling the case.