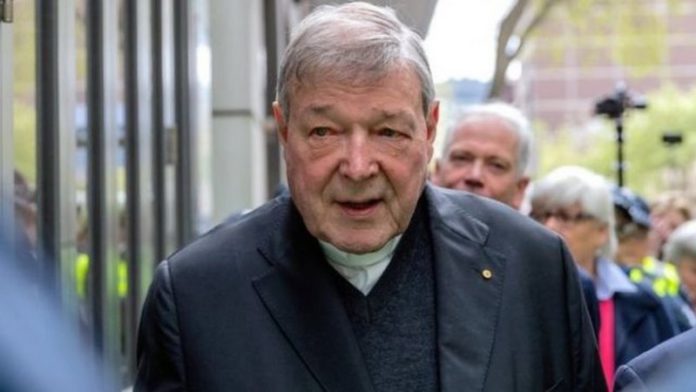 Cardinal George Pell, the most senior Catholic cleric to be convicted of sexual abuse, has failed in a legal bid to quash his convictions in Australia.

Pell was jailed for six years in March after being found guilty of abusing two boys in a Melbourne cathedral in the 1990s. He maintains his innocence.

A court of appeal rejected Pell’s argument that the verdict was unfair.

The former Vatican treasurer, 78, will now consider a final appeal in the nation’s highest court.

Pell challenged the verdict by arguing it was “unreasonable” because there was insufficient evidence to convict him beyond a reasonable doubt.

The cleric’s lawyers said the jury had relied too heavily on the “uncorroborated evidence” of the sole surviving victim. But his appeal was dismissed 2-1 by a panel of three judges in Victoria’s Court of Appeal on Wednesday.

“Justice [Chris] Maxwell and I accepted the prosecution’s submission that the complainant was a compelling witness, was clearly not a liar, was not a fantasist and was a witness of truth,” said Chief Justice Anne Ferguson.

Pell’s conviction has rocked the Catholic Church, where he had been one of the Pope’s closest advisers. The Australian cleric will be eligible for parole in October 2022.

What did the trial hear?

Pell was archbishop of Melbourne in 1996 when he found the two boys on cathedral premises and sexually assaulted them. He abused one of the boys again in 1997.

The trial heard testimony from one of the victims. The other died of a drug overdose in 2014.

A jury rejected the defence argument that the allegations were fantasies. It convicted Pell of one charge of sexually penetrating a child, and four counts of committing an indecent act on a child.

The verdict was kept secret from the public until February, when additional charges of sexual offences against Pell were withdrawn by prosecutors.

What did the court of appeal say?

The two judges who upheld the conviction said that they “did not experience a doubt” about the verdict.

“We note that Cardinal Pell did not have to prove anything in the trial. Rather, at all stages of trial, the burden of proof rested with the prosecution,” Justice Ferguson said.

Pell, who was present for the hearing, had faced the prospect of a retrial or being immediately set free if his appeal had been successful.

It took less than five minutes for George Pell to learn his fate. Dressed in black and wearing a clerical collar, the man who was once in the Pope’s inner circle was impassive as Justice Ferguson handed down the decision.

Occasionally, he looked down, his gaunt features betraying no emotion. When the news filtered through to campaigners and survivors of abuse outside, there was a loud cheer.

“Pell looks better in green than black,” one activist told me, referring to the cardinal’s prison uniform.

Pell was transported by van back to prison after the judgement

Campaigners accept, however, that Pell’s fight for freedom probably isn’t over and that a final court challenge could remain.

Pell’s surviving victim, who cannot be named, said he was “grateful for a legal system that everyone can believe in”.

“My journey has not been an easy one,” he said in a statement read by his lawyer. “It has been all the more stressful because it involved a high-profile figure.”

Pell’s lawyers said he was “disappointed” with the decision and maintained his innocence.

Australian Prime Minister Scott Morrison told reporters: “My sympathies are with the victims of child sexual abuse. Not just on this day, but on every single day.”

He said Pell was likely to be stripped of his Order of Australia honour.

Will there be another appeal?

Pell’s lawyers said they would “thoroughly examine” the judgement to make a possible last-ditch appeal in the High Court of Australia.

However, there is no guarantee that the court will agree to hear the case.

What does the Church say?

The Australian Catholic Bishops Conference said it accepted the court’s decision, but added that it would “be distressing to many people”. It reiterated its commitment to tackling abuse.

Pope Francis continues to face calls for Pell to be defrocked.