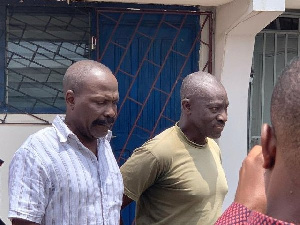 The Kaneshie District Court on Thursday discharged Mr Gershon Akpa, a weapons mechanic who is one of the ten persons accused of treason on the advice of the Attorney General (A-G).

Ms Hilda Craig, a Senior State Attorney, who announced this at the Court, said, he had been replaced with one Johannes Zikpi of the Signal Unit of the Ghana Armed Forces.

It would be recalled that the docket on the trial of the 10 accused charged with conspiracy to commit crime, treason and possession of explosives without lawful authority was sent to the A-G’s for advice.

The Court presided over by Mrs Eleanor Kakra Barnes-Botchway discharged the Akpa and struck-out the charges against him.

The A-G, therefore, substituted the old charge sheet with a Bill of Indictment (BI) filed on February 19, 2020. The Prosecution then prayed the Court to withdraw the charge sheet filed before it on February 12, in respect of Akpa.

The trial was adjourned to Tuesday, March 3 for the committal proceedings to commence.

Mr Victor Kwadjoga Adawudu, Counsel for Mac-Palm, Kafui, Debrah, Abubakar and Akankpewu pleaded with the Court to grant them the permission to appeal against the Court’s ruling against an earlier application for disclosure of evidence, as the court’s reason then was that it was premature for that application to be heard.

The Court also ordered Prosecution to ensure that the investigators bring Assistant Commissioner of Police Dr Benjamin Agordzo’s gadgets, phone, tablet and a laptop computer to court if they were not exhibits.

The Prosecution was represented by Ms Craig, Mr Albert Quaiditey and Ms Winifred Sarpong, Principal State Attorney as leader of the Prosecution.

All counsel for the accused being Mr Bede Tukuu, for Solomon; Mr Ziyerley Agambilla, for WO2 Saan; and Mr Anthony Lartey new counsel for Colonel Gameli were present.

ASP Asare had told the Court that Mac-Palm was a medical practitioner, Kafui, a blacksmith, Debrah, a freight manager, ACP Agordzo, Police officer and the rest officers of the Ghana Armed Forces (GAF).

He said they were all members of the Take Action Ghana-a Non-Governmental Organisation, incorporated by Mac-Palm in 2018.

ASP Asare said the group planned to demonstrate against the government as well as overtake it, so Mac-Palm contacted Kafui, a resident of Alavanyo to manufacture arms for that purpose and he produced them.

The Prosecution said later, the others were also contacted including; Akpa, a weapons mechanic with the Ghana Armed Forces, who also agreed and supplied two AK47 for GH¢2,000.00 but could not produce more and returned some of the money after pressure was mounted by Mac-Palm.

The Prosecution said they also held meetings to facilitate the process and drew a map covering the Flagstaff House, Ghana Broadcasting Corporation, 37 Military Hospital, Burma Camp to facilitate their movements.

ASP Asare said Colonel Gameli promised to give his support before, during and after the planned event.

He said when Kafui brought the 22 explosives, six pistols, three grenades and five ammunitions, Mac-Palm accommodated him, adding that all took place from June 2018 and September 2019.

The Prosecution said Mac-Palm was said to have also provided a quantity of substance which when inhaled, would make one sleep for an hour.

The Prosecution said Police upon a tip-off, arrested Mac-Palm on September 19 and the rest subsequently and a docket to that effect was sent to the AG for advice.

Meanwhile, ACP Agordzo has been granted a self-recognisance bail of GH¢500,000.00 by an Accra High Court presided over by Justice Charles Ekow Baiden.

Counsel for WO2 Saani had also secured a bail but she has since not met the bail conditions, whilst Mr Adawudu is still seeking bail for his other clients.

Previous Rest in peace to me: Man commits suicide after posting on Facebook
Next SONA2020: Teachers to be granted professional allowance – Prez. Akuffo Addo