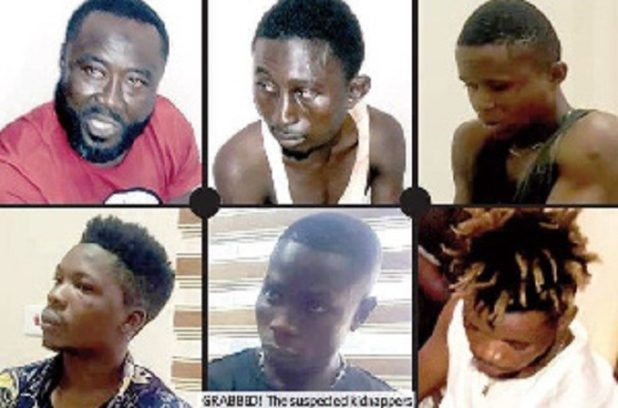 Suspected kidnappers of the Canadian nationals

The Court granted the relief after a prayer by the prosecution led by Mrs Hilda Craig, Senior State Attorney for the publication of the names and pictures of the two in the daily newspapers as well as any social media platforms of the state security apparatus.

The two only known as Mohammed and Derry are believed to be hiding in Kumasi.

The Senior State Attorney thus prayed the court for a two-week adjournment to enable the state to wrap up its investigations, adding that they have to get in touch with the victims, who were out of the jurisdiction to conclude their investigations.

She said “investigations are still on going and that although the victims are out of the jurisdiction, we are still in touch with them through the embassy”.

During the cause of the proceedings in Court, some of the accused persons claimed that, they were being tortured at the Bureau of National Investigations (BNI) cells.

They accused BNI officials of torturing them all in an attempt to force them to admit to something, they have not done.

Mr Andy Kudjor Vortia, Counsel for Seidu Abubakar, one of the accused persons told the court that his client was physically assaulted and has sustained injuries and prayed the court to grant him bail.

He said “the right for bail for my client has accrued. Nothing links him to the other accused persons, for him to spend another two weeks in custody after already spending three weeks.”

Another accused person, Sampson Agarlor also told the court he had sustained a bone injury on his wrist due to the use of handcuffs on him just in an attempt to force him to speak.

He said that “the BNI and the CID exerted torture on me while forcing me to accept a statement against myself. Am not saying am innocent, I played some roles, but definitely not all the roles am accused of”.

The accused alleged that they were totally cut off from interacting with their families, and prayed the court to remand them into prison custody, where they could get access to talk to others and receive visitors.

The court, presided over by Justice George Buadi remanded all the eight accused persons into the custody of the BNI.
The Court also ordered the Counsel for Seidu Abubakar, to make a formal application for bail for the prosecution to respond.

The accused are to reappear on July 15.

The eight accused are before the court for the allegedly kidnapping two Canadians nationals Miss Lauren Patricia Catherine Tilley and Miss Bailey Jordan Chilly, in Kumasi, on June 4.

Their pleas have not been taken as investigations continue.