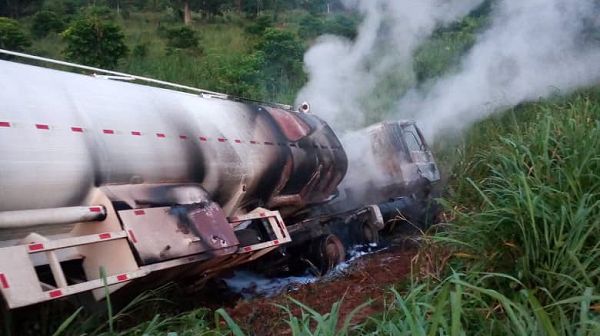 Meanwhile the police have mounted an intensive search for a third accomplice, Fataw Mohammed, who is said to be on the run.

Mohammed is alleged to have masterminded the whole operation and even sought for buyers for the diesel.

According to the head of the Special Investigations Unit of the Criminals Investigations Department (CID) of the Ghana Police Service, Superintendent Ebenezer Nketiah, further investigations has led to the arrest of two patrons of the diesel, Kofi Dzisah and Nana Yaw.

Two other accomplices, Evans Pablo and another whose name was given only as Daisah, are however, said to be on the run.

Supt Nketiah said so far, 27,000 litres of the diesel had been retrieved from patrons, while investigations were ongoing to arrest other patrons and also recover the remaining 27,000 litres.

In its Saturday, July 6, 2019 edition, the Daily Graphic carried the story of the tanker driver and his mate who were arrested by the police for allegedly setting a diesel tanker ablaze in a bush near Osino in the Eastern Region after they had emptied and sold its 54,000-litre diesel load.

The tanker, with GH¢280,260 worth of diesel from Fuel Trade in Tema, was headed for Yendi in the Northern Region, but was allegedly diverted and its content sold in Tema, after which the suspects drove the empty tanker to Osino, where they set it ablaze.

The police said some time last year, the owner of the DAF CF 460 truck, with registration number GS 264 14, gave the vehicle to Yakubu to drive and also engaged Boadi as his mate.

They left Tema in the night and met the owner at the Community 18 Junction on the Accra-Tema Motorway, where he gave them GH¢2,400 as their per diem to Yendi and back.

But instead of traveling to Yendi, they returned to Tema where they sold the content of the truck before driving to Osino to set the truck on fire.

They later called the owner of the Tanker vehicle to report that they were involved in an accident that led to the vehicle bursting into flames.

Checks subsequently revealed that the tanker was emptied before it was set ablaze. Besides, the driver was nowhere near the scene, while the mate sat near the tanker.

The owner of the truck then picked the mate from Osino to Accra, where he lodged a complaint at the CID Headquarters and handed the mate over to the police for further investigations.

Investigations by the police led to Yakubu’s arrest from his hideout in Kumasi, and when he was brought to Accra, he confessed to the crime and mentioned Mohammed as the mastermind of the arson.

Previous ARREST SPEAKER OF PARLIAMENT NOW– JACOB OSEI YEBOAH
Next Pray for me: Thief’s apology letter after breaking into a church