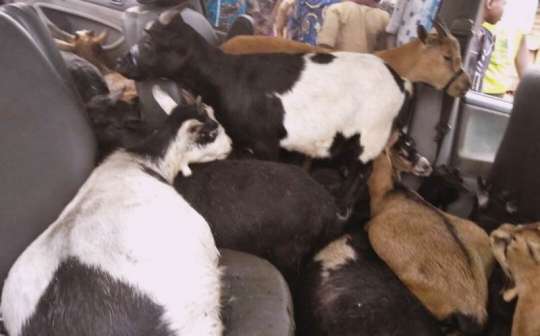 Police in Ejisu in the Ashanti Region have impounded a taxi cab loaded with goats, suspected to have been stolen.

This was at Akyawkrom, near Ejisu on the Ejisu-Effiduase highway.

He said on the said date around 0300 hours, the team from the Division, who were on their normal night patrols on the Ejisu-Konongo section of the Kumasi-Accra highway, spotted a Toyota taxi with the registration number GM 4893-13.

Superintendent Egissah said the patrol team became suspicious and decided to give the vehicle a chase.

He said when the taxi driver realized that the car was being trailed by the police, he stopped at Akyawkrom and together with another person got out and run into the bush.

The taxi cab and the goats were taken to the Divisional Command.

The Commander said investigations have begun and are appealing to people who had experienced vehicle or goat thefts in recent times, to report to the command to assist in investigations.