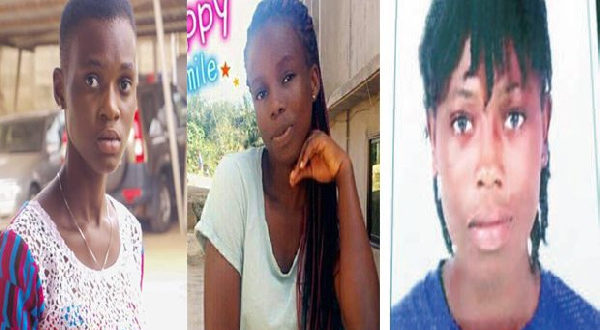 The families of the three missing Takoradi girls have called for an independent DNA test following the retrieval of some skeletons from a septic tank behind the house of the prime suspect, Samuel Odeoutuk Willis.
The remains are believed to be that of the three girls who went missing between August and December 2018.

Miss Kate Quayson an elder sister to one of the missing girls Ruth Quayson said the news had thrown the Sekondi-Takoradi municipality, especially Kansaworodo, into a state of shock.

However, the families are yet to come to terms with this latest development and that they had been invited to the Police Headquarters in Accra to meet with the police hierarchy for briefing.

“Until forensic and DNA investigations establish that the body parts found to be that of theirs, all we know is that our loved ones are still alive.”

Miss Kate Quayson an said if the police were convinced what they had found was a good lead to unravelling the mysteries surrounding the missing girls, the DNA and forensic investigations should be conducted in independent laboratories and not that of the police.

A team of investigators from the Criminal Investigations Department of the Ghana Police Service found the remains when they went on the operation yesterday evening and found some skeletons of three persons from a septic tank in a house in Kansaworodo, a superb of Takoradi, believed to belong to the missing girls.