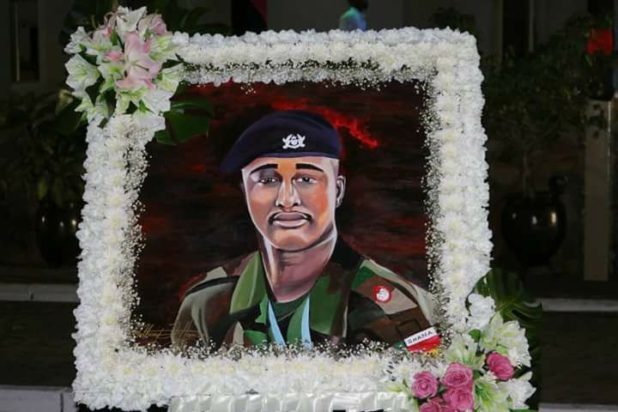 A group calling itself the Coalition of La Associations (COLA) has given President Nana Akufo-Addo a one-week ultimatum to order the Ghana Armed Forces to stop putting up a statue of Late Major Maxwell Mahama on the land of La.
Work is currently ongoing for a 20-foot monument in honour of the late Major at the Airport Hills Roundabout.
The coalition contends that the statue of the slain soldier should rather be mounted at Denkyira Obuasi where he was killed almost two years ago, and not on the land of La.
Speaking to Citi News at a press conference, President for COLA, Oscar Nii Odoi Glover, said the group would be forced to besiege the Jubilee House if the President does not heed to their call.

“Why La? Why not the place he died or his own hometown but they dump it on us because La is a dustbin…We are telling him we don’t like this and that we expect him to act. He has told the whole country that he is a listening president, so he has to listen to us. Perhaps in a week’s time, we should expect to hear something. We expect to see something.”

Major Maxwell Mahama was lynched on Monday, May 29, 2017, by a mob at Denkyira-Obuasi in the Central Region.
He had been deployed to serve at Diaso in the Central Region when he was lynched.
Besides the statue, a trust fund set up by the government to cater to Major Mahama’s wife and children.
President Nana Akufo-Addo also made a personal donation of GH¢ 50,000 towards the fund.
The monument is in line with a request from the family of the late military officer.
Major Mahama’s family made the request known during a courtesy call on the president in 2017, where it expressed the hope that the monument would serve as a reminder of the tragedy and a deterrent to the canker of mob justice in Ghana.