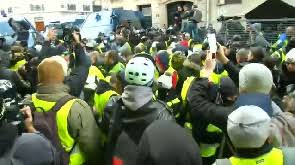 Gunshots were fired into the air outside the gates while neighbours videotaped the incident.
The same macho men in NSC-branded t-shirts who are suspected to be members of a vigilante group attacked some voters at the La-Bawaleshie Presby JHS polling station on Thursday and fired gunshots in the air during voting in the Ayawaso West Wuogon by-elections.

Four people believed to be sympathizers of the opposition NDC were also shot with one crippled.
The Accra Regional Police Command has said they have beefed up presence of security force at all polling stations, collation centres and all other relevant locations associated with the electoral process following the violence.
Deputy Superintendent of Police, Effia Tenge, who is Head of the Public Affairs Unit in Accra, said in a statement that the police has a firm strategy to ensure the safety and security of electorates, media personnel and all accredited persons involved in the by-election.

The statement said further that the police is resolute to work with the Electoral Commission, sister security agencies and relevant stakeholders to ensure that all electoral materials are safeguarded for the integrity of the by-election.
As part of the security measures, police have banned the movement of motorbikes in the constituency during the election period.

NDC pulls out
In reaction to the development, The National Chairman of the NDC, Samuel Ofosu Ampofo has told Joy FM’s Super Morning Show monitored by MyNewsGh.com that the party has withdrawn from the elections for security reasons.
“Armed security men besieged our candidate ’s home and we can no longer guarantee the security of our people and our polling agents,” he said.

“We have conferred with our candidate, Delali Kwesi Brempong and he is traumatized by the incident. We also do not believe a single life should be lost in this by-election so we have withdrawn from the process,“ he told Daniel Dadzie.
Source: MyNewsGh.com/