Violence has reared its ugly head in Ghanaian politics once again as the Ayawaso West Wuogon by-election has been rocked by a withdrawal of the NDC. 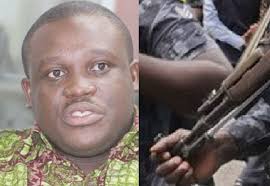 The opposition party has announced their withdrawal on the back of violent attacks suffered by some of their polling agents and an alleged armed assault on the house of their parliamentary candidate in the constituency.

Another top NDC official who alleges to have suffered an attack in the area is the Member of Parliament for Ningo Prampram, Sam Dzata George. According to Sam George, he was also monitoring the elections when he was attacked.

Sam George alleges members of the NPP’s Invincible Forces dressed up as National Security officials attacked him and fired several shots at him.
He took to Facebook to narrate his ‘ordeal’ and sarcastically thanked President Akufo-Addo.
He wrote…
“I have just been assaulted by several members of the NPP Invincible Forces attired in National Security Council shirts and vests. They fired several rounds of ammunition at me simply because I was doing my legal job of monitoring the Ayawaso West Wuogon by-election.
“President Nana Addo Dankwa Akufo-Addo, I am grateful to you.”