Five Ghanaians, four of whom who were arrested in the United States and one arrested in Ghana, all for internet fraud, popularly known as Sakawa have pleaded guilty with hope of a lighter sentence, MyNewsGh.com has learnt. 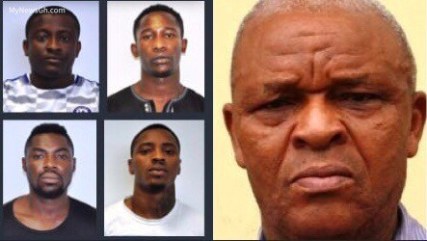 The first four defendants – Tourey Ahmed Rufai aka “Joe Thompson,” aka “Joe Terry,” aka “Rufai A Tourey,” aka “Ahmed Rufai Tourey,”; Prince  Nana Aggrey, Abdul Rasheed Masoud and Mubarak Baturi aka “Eben Karsah,” were arrested in 2018 and pleaded guilty earlier this year.
Their crimes involve the theft of over $10 million through business email compromises and romance scams that targeted elderly people and businesses in the United from 2014 through to 2018.

The fifth defendant who was a co-conspirator in Ghana received his wired share of the cash in Ghana.
They directed the receipt of over $10 million in fraud proceeds from victims of the scam in bank accounts that they controlled in the Bronx, New York.  Some of these bank accounts were opened using fake names, stolen identities, or shell companies in order to avoid detection and hide the true identities of the members of the Enterprise controlling those accounts.  Once the defendants received the fraud proceeds in bank accounts under their control, the defendants withdrew, transported, and laundered those fraud proceeds to other members of the Enterprise, including those located in Ghana.
The fraud scheme by the syndicate tricks businesses into wiring funds into accounts controlled by them. First, members of the Sakawa gang created email accounts with slight variations of email accounts used by employees of a victim company or third parties engaged in business with a company, to “spoof” or impersonate those employees or third parties.

These fake email accounts were specifically designed to trick other employees of the company with access to the company’s finances into thinking the fake email accounts were authentic.  The fake email accounts were used to send instructions to wire money to certain bank accounts and also included fake authorization letters for the wire transfers that contained forged signatures of company employees.
By using this method of deception, the scheme sought to trick the victims into transferring hundreds of thousands of dollars to bank accounts the victims believed were under the control of legitimate recipients of the funds as part of normal business operations, when in fact the bank accounts were under the control of members of the syndicate of Ghanaian fraudsters, including Adamu, Rufai,, Aggrey, Masoud, and Baturi.
Rufai, Aggrey and Baturi pleaded guilty on January 9, January 28, and February 8, 2019, respectively, to one count of conspiracy to commit wire fraud.
Masoud pleaded guilty on January 18, 2019, to one count of receiving stolen property.  Adamu pleaded guilty before U.S. Magistrate Judge Kevin Nathaniel Fox.  The case is assigned to U.S. District Judge Denise L. Cote.
MyNewsGh.com learnt Adamu is scheduled to be sentenced on June 7, 2019, at 10:30 a.m; Rufai on April 12, 2019, at 11:00 a.m; Masoud on April 19, 2019 11:00 a.m, Baturi and Aggrey on May 10, 2019, at 10:30 a.m. and 2:00 p.m., respectively.  Each of the defendants will be sentenced by Judge Cote.