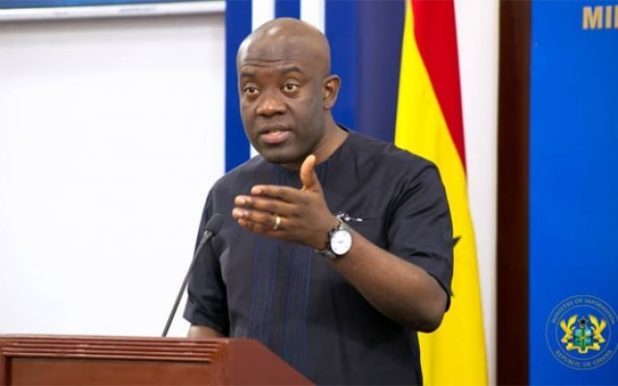 It took an estimated 25-minute period for national security personnel to capture all 8 suspects involved in the kidnap of two Canadian ladies in Kumasi.

Information Minister, Kojo Oppong Nkrumah revealed this during a press briefing Wednesday as part of details about the rescue mission of the ladies whose story has made the headlines since their abduction on Tuesday.
The two; Lauren Patricia Catherine Tilley, 19, and Bailey Jordan Chitty, 20, according to him, were found in the early hours of Wednesday June 12, 2018 at Kanyasi in Kumasi.

Intelligence gathering efforts enabled the security agencies to zero in on the suspects associated with the incident. The suspects he maintained however did not go without fighting; they engaged their bullets, resulting in series of gunshot exchanges between the suspects and the security team.
One suspect sustained minor injuries resultantly from the shoot-out.

“At 1900 hours, a first arrest was made, by 21:15 hours, one of the persons who is an accomplice directly involved in this incident was also arrested by the joint team running this operation. A local Ghanaian contact who was providing habouring for the kidnappers was apprehended around 20:45 hours leading to the arrest of the other accomplices”.

“The holding place of the victims was subsequently surrounded just before 5 am this morning and by 5:15 am, a joint team had breached the premises with the hopes of rescuing the girls. Gunshots were fired from within the premises and it took about 25 minutes to complete this operation. By the end of the operation, the two Nigerians who were holding the women had been subdued and the third Nigerian believed to be the leader of the gang was arrested later at a separate location”, he stated..

Eight suspects have so far been arrested in connection with the crime; five Ghanaians and three Nigerians.

Kojo Oppong Nkrumah maintained that “no foreign assets were involved in the operation” despite rumors that government and the police received satellite information from the Canadian government.

He disclosed that the victims are currently in Accra and undergoing evaluations at the Canadian Embassy.

Other investigations and other possible arrests are still ongoing.

Lauren Patricia Catherine Tilley, 19, and Bailey Jordan Chitty, 20, were abducted on June 4, 2019, in Kumasi while returning to their hostel from a youth development programme organised by Youth Challenge International.

At the Asokwa Four-Junction area, Lauren, Bailey and a third person told their colleagues they were going to their hostel at Nhyiaeso around the Royal Gulf Club.

Their colleagues and friends never saw them again, with their disappearance sparking one of the biggest police operations in Kumasi against the backdrop of recent kidnappings in the country.

Previous (Video)The suspected kidnappers of the Canadian girls being conveyed to Accra for questioning.
Next [VIDEO]: Identities of 8 Canadian Kidnappers REVEALED

By:brightwebtv.com nana Asare barimah The taxi that killed five on the spot at Tegbi …