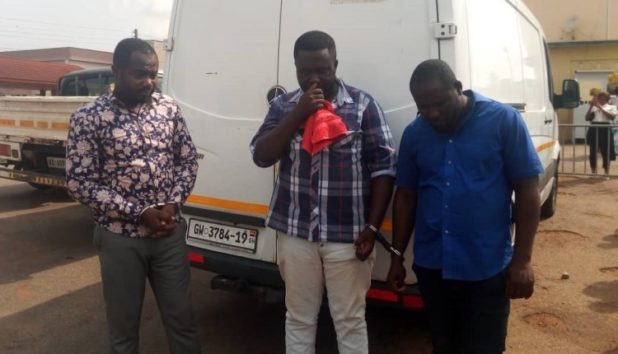 The Ashanti Regional Command has arrested 3 suspected car fraudsters for their involvement in some car fraud cases reported to the command, MyNewsGh.com has filed.

The suspects are Osei Abrokwa 32 years, Daniel Kofi Yirenkyi 35 years and Emmanuel Kwesi Anane 32 years.
Addressing the media in Kumasi, the Ashanti Regional Police Public Relations Officer (PRO) DSP Godwin Ahianyo said the suspects in their modus operandi approach any unsuspecting car dealer and feign interest in buying car.
They will then issue a cheque with the promise that it will mature in three days for which the unsuspecting car dealer can go and withdraw from the bank.
According to DSP Godwin Ahianyo, the suspects will later prepare a forged document to cover the vehicle and then send it to a garage to a prospective buyer and use the vehicle as collateral to secure a loan from the buyer.

DSP Godwin Ahianyo explained the suspects will then call the original owner of the vehicle and tell the person that his/her vehicle has been abandoned at a particular garage and that they are no more interested.
The car owner will later go to the said garage and find out that the vehicle has been used as collateral to secure a loan. Both the vehicle owner and the moneylender will realized that they have been swindled by the suspects.
“Investigation also suggest that they have been swindled a number of unsuspecting car dealers and other businessmen and women within the Kumasi metropolis and other part of the country on their modus of operandi. Some of which are diversion of truck loaded with bags of rice, beans, sugar, cashew nut and others” DSP Godwin Ahianyo said.

The suspects were on March 26, 2019 arrested by the police and they are currently in police custody assisting with investigations and would soon be arraigned before court.