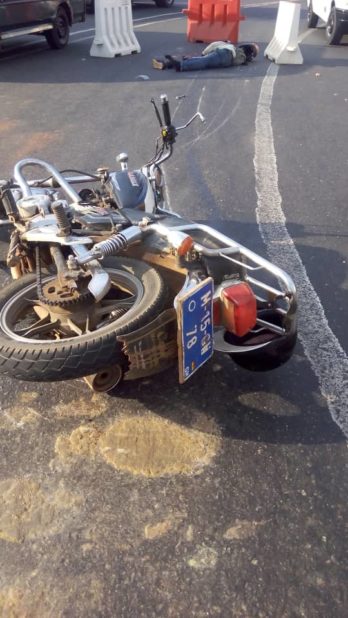 A pedestrian on Tuesday evening met his untimely death after he was knocked down by a speeding motorbike at Patasi, a suburb of Kumasi in the Ashanti Region while crossing the road.

Angry residents nearly lynched the rider but for the timely intervention of security personnel who were immediately called to the scene to save the situation.

Pure FM’s Osei Kwadwo revealed that the deceased believed to be in his 20s was crossing to the other side of the road to board a car and he was knocked and killed by the speeding motorbike.

Residents who spoke about the unfortunate incident revealed that road users on that stretch have consistently refused to adhere to speed limits resulting recurring knockdowns
“This is not the first time such incident is happening. The drivers and motor riders always knocked down pedestrians with their speeding motorbikes and vehicles. The situation is so pathetic. Killing a 20-year-old boy is sad news for us. We are not going to tolerate such incidents anymore “they warned.

The  body of the deceased has  since been deposited at Komfo Anokye Hospital Morgue while the motorbike rider has been handed over to North Suntreso Police and is in custody assisting with investigations.