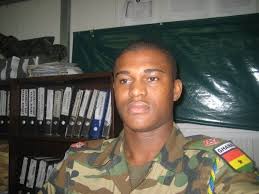 Prosecution in the trial of the alleged murderers of the late Major Maxwell Mahama on Tuesday tendered items allegedly used by the accused persons to kill the late Major.

These are six inches cement blocks, stones and a metal bar.

Mrs Evelyn Keelson, Chief State Attorney, led Assistant Commissioner of Police, Mr Baffour Appenteng Nyamkye, who is also the 12th prosecution witnesses to tender the items after he identified them.

Mr Appenteng, in his evidence in chief, told the trial Court that at the scene, when the deceased was killed, he together with his men found these items, which they picked and preserved as part of their investigations.

He said he was in his office on May 30, 2017 at about 1100 hours, when the Director-General of CID, informed him that there had been an incidence at Denkyira-Oboasi, where a Military man had been murdered, so he should lead a team of Policemen to conduct investigations into the matter.

He said, he took 30 policemen, some in plain clothes and detectives to the crime scene at Diaso, the District Capital of the Upper Denkyira West around midnight.

The Assistant Commissioner of Police said early in the morning, they had a briefing from the District Commander, one DSP Agyeman, who said the Police had heard that someone had been murdered at Denkyira-Oboasi, so he mobilised his men to the crime scene only to see a male adult partially burnt, naked and dead.

He said “Upon the briefing l decided to visit the crime scene with my local team and at the scene and upon interrogation, l got to know, where the deceased was trapped by some people of Denkyira,” he added.

He said he also saw, where the deceased made several attempts to escape but was not successful and was eventually killed.

Mr Appenteng, who had worked with the Police Service for 30 years, said upon these observations and with the assistance of a google map, he reconstructed the crime scene sketch into a pictorial presentation.

At this stage, the witness identified the crime scene pictorial representation in open court, which he wanted to tendered but defence counsel, George Bernard Shaw objected to the tendering, indicating that the document has commentary on it.

Mr Patrick Anim-Addo, another defence counsel, in the case told the court that the witness used hearsay to reconstruct the sketch.

In the response from the prosecution, Mrs Keelson said the objections raised by the defence had no merit at all and the witness has stated in his evidence in chief that he got to the crime scene and based on investigations and information, he reconstructed a crime scene sketch.

“The document is relevant and the witness had not mentioned the names of any of the accused persons,” he added.

The Court presided over by Justice Mariama Owusu giving her ruling said under the evidence Act the document was admissible.

She said there was nothing prejudicial with the document and also there was no merit in the objections raised by the defence.

The witness continuing his evidence in chief explained the sketch said it was a pictorial representation of the crime scene.

He told the court that the deceased made several attempts to escape from his attackers but it proved futile and he was killed.

Mrs Keelson asked the witness, what further happened, of which the witness said that with the identification of the items at the scene, and the news going viral, based on information and intelligence, they went to the nearby towns and made some arrests.

The witness said they made a total of 56 arrests including the accused persons now standing trial but with the advice from the Attorney General’s Department, only 14 were charged.

Mr Appenteng also told the court that in course of the investigations, they picked information and retrieved two single shot barrel-guns allegedly used to attack the deceased.

He said “One was retrieved from the room of one Yaw Amankwah, now at large and the other from the room one other person, which was used by Akwasi Asante, an accused person in the case”.

The two shot guns retrieved were tendered in evidence.

The witness said he again visited Denkyira-Oboasi and had information that Akwasi Boah, an accused person was having the deceased’s pistol which he alleged that he picked the gun at the crime scene, which he in turn gave it to one Philip Boadu, a Community Prison Officer.

The deceased’s pistol was tendered in evidence without any objection from defence.

During cross-examination by Mr Shaw, he asked the witness whether the crime scene was cordoned-off but the witness answered in the negative but indicated that the scene was not disturbed.

Counsel asked, how he got to know that the crime scene was not disturbed, and the witness said the items he came to meet at the scene indicates the area was not tampered with.

The Defence counsel said “will you agree with me that anyone can interfere with the evidence” but the witness said “My Lord like l said earlier in the villages, crime scenes are no go area for residents.”

Fourteen persons are standing trial at an Accra High Court over the killing of Major Mahama, who was an officer of the 5th Infantry Battalion, at Burma Camp.

The late Major was on duty at Denkyira-Oboasi in the Central Region when on May 29, 2017 some residents allegedly mistook him for an armed robber and lynched him.

The mob had ignored his persistent plea that he was an officer of the Ghana Armed Forces.