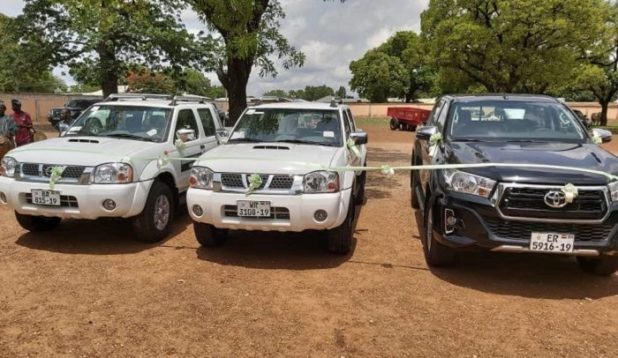 A vehicle being used by the Savannah Regional Minister, Salifu Adam Braimah was snatched by armed robbers at gunpoint in Tamale, MyNewsGh.com has confirmed.

The Toyota Hilux pick-up vehicle with registration number WR 3516-19 according to police sources that confirmed to MyNewsGh.com, had picked the Minister from Damongo and was dropped off at the Tamale airport to attend an official meeting in Accra.

While returning to Tamale township, the driver only identified as Eliasu was attacked by armed men numbering about five who seized the vehicle and later tied him to a tree in the bush and fled with the vehicle.

Some persons who later spotted him fastened to the tree while going to the farm, rescued him after which an official complaint was lodged with the Northern Regional Police Command who confirmed to MyNewsGh.com.

At the time of going to the press, the vehicle which was among a fleet handed over by President Nana Addo Dankwa Akufo-Addo during his tour of the new region was yet to be traced.

Meanwhile, the police say they have relayed the necessary information to various outlets to help track the suspects and the vehicle.

Officials of the Savannah Region are currently tight-lipped over the matter.