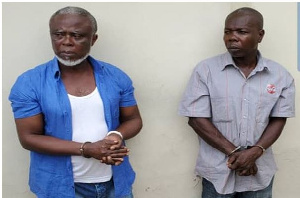 Some of the suspects

The list of suspects in the Alajo Doctor coup plot is widening, with the Bureau of National Investigations (BNI) set to invite the former executive to the immediate-past Inspector General of Police (IGP).

When Peter Lanchene Toobu, former Superintendent of Police, now Parliamentary Candidate (PC) for the opposition National Democratic Congress (NDC) in the Wa West Constituency of the Upper West Region takes his turn, the number of persons the BNI would be dealing with in their ongoing investigations would have increased by a number.

His name appears to have popped up in the large quantity of audio and video recordings now valuable assets in the ongoing investigations into the alleged coup plot with its genesis in the Dr. Frederick Mac-Palm Alajo-based Citadel Hospital in Accra.

The BNI in conjunction with the National Security apparatus are jointly working on vital communication exchanges amongst the suspects, and is nailing persons who would by all means be invited in the investigations, a source has told DAILY GUIDE.

The intelligence community especially the BNI is more primed today in dealing with clandestine communications, the modern equipment at their disposal facilitating this feat.

Although considered a person of interest or even a valuable asset in the case, it is unknown whether he could be immediately charged as ACP/Dr. Benjamin Agordzor has been charged for treason.

It will depend on the extent of his involvement in the coup discussions as being deduced from the exchanges as contained in the audio and video evidence.

The former Executive Secretary of the immediate-past IGP made the headlines following his resignation from the Police Service and quickly announcing his intention to contest the NDC parliamentary seat in Wa West.

There was backlash from non-NDC persons who were surprised that the then IGP would allow an active politician to be his executive secretary.

Already, ACP/Dr. Agordzor who was picked up earlier over his alleged involvement in the coup plot has been charged with abetment to commit treason.

He is alleged to be one of the financiers of the Dr. Mac-Palm-led treasonable project.

In another development, lawyer of ACP/Mr. Dr. Agordzor has complained about the inability of his client’s family to have access to him.

Yesterday the lawyer, Martin Kpebu, said the family of the detained superior police officer were at the BNI offices in Accra at 6.30 am but were denied access to him.

“Since morning, it is only the receptionist who has spoken to us. They’ve denied his wife, sons, sister, uncles, sister and brothers access. They have been here since 6:30 am. I came much later and I have also been denied access.

“At one point, his wife and the rest of the family were told they would be granted access at 8 a.m. When it was 8 a.m, there was no show and the story has been changing…now we just don’t know what to do,” Mr. Kpebu said in an interview on Joy FM at midday yesterday.

According to the lawyer, a WhatsApp message from a group with Dr. Agordzor allegedly as a member had him advising members about the need to seek a police permit for an intended demonstration.

The message was showed to him by security officials when at the BNI offices, the lawyer said, adding “this is traumatizing. This is unbecoming; we will not tolerate that in this country. Yesterday, for over 7 hours, they confronted us with only WhatsApp messages.”

The civilians who have already been charged are Dr. Frederick Yao Mac-Palm, a doctor and the alleged mastermind behind the coup plot; Donya Kafui, aka Ezor, a local weapon manufacturer (blacksmith) from Alavanyo, and Bright Allan Debrah Ofosu, aka BB or ADC.