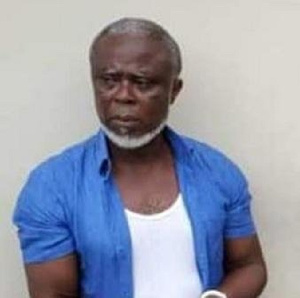 Dr. Frederick Yao Mac-Palm is one of the suspects

A new suspect has been arrested and charged in connection with the alleged plot to overthrow the Akufo-Addo government last year.

The suspect, Johannes Zikpi, is a civilian employee of the Ghana Armed Forces Regiment in Accra.

It is not yet clear what role(s) he played in the alleged plot by civilians, military officers and a senior police officer to destabilize the country and overthrow the government.

His arrest brings to 11 the number of people who have been detained and charged in connection with the alleged coup plot which was reportedly led by Dr. Frederick Yao Mac-Palm, Proprietor of Citadel Hospital at Alajo, Accra.

The Office of the Attorney-General (A-G) has filed a bill of indictment and the summary of evidence of the accused persons who are before a Kaneshie Magistrate Court for committal.

The Bill of Indictment was filed on Wednesday and all the accused persons have been served, giving them the opportunity to know the case the prosecution has so far built against them.

Meanwhile, one of the accused persons, Gershon Akpa, a civilian working with the army, has been discharged.

This follows the decision of the state to drop the charge of abetment of treason felony, as well as abetment of possession of weapons and explosives without lawful excuse, against him.

Appearing before a Kaneshie District Court yesterday, Hilda Craig, a Senior State Attorney, told the court that they were withdrawing the old charge and replacing it with the Bill of Indictment.

She subsequently urged the court to discharge Gershon Akpa as the A-G had decided to drop the charges against him.

The court presided over by Eleanor Barnes- Botchway then discharged Akpa and struck out the charges against him as withdrawn.

As it is, Zikpi, together with nine others, and Dr. Mac-Palm are likely to stand trial at the High Court if committed by the lower court.

The court yesterday dismissed an ex parte application filed by the accused persons seeking leave to appeal the decision of the court.

Victor Adawudu had filed an application asking the court to compel the prosecution to disclose the documents it intends to rely on for the trial.

The court dismissed the application, saying it was premature as the committal proceedings had not even taken place.

It was this ruling that the lawyer was seeking leave from the court to appeal against.

Magistrate Barnes-Botchway dismissed the application, saying it was filed out of the 14-day window provided by the rules of the court.

Dr. Mac-Palm, Assistant Commissioner of Police ACP/Dr. Benjamin Agordzo and a senior officer, Col. Samuel Kojo Gameli, are before the court for their alleged involvement in the coup attempt.

Other accused persons include Donya Kafui, aka Ezor, a local weapon manufacturer (blacksmith) from Alavanyo, and Bright Allan Debrah Ofosu, aka BB or ADC – both civilians.