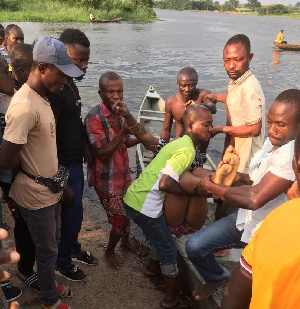 The Eastern Regional Police Command has arrested the owner of a canoe which capsized on the Volta Lake at Senchi in the Asuogyaman District resulting in the death of four persons.

The suspect, Kportufe John is helping police investigation into the incident.

According to the PRO of the Eastern Regional Police Command, DSP Ebenezer Tetteh, if the suspect is found to be complicit he’ll be prosecuted.

He said from the look of things the deceased were not wearing life jackets while travelling on the Lake which endangered their lives.

The boat which was carrying 10 members of the Assemblies of God Church from Senchi to old Akrade capsized on the Volta Lake while returning from a church programme on Saturday afternoon.

Four persons died, while six of the victims were rescued and currently receiving treatment at the hospital.