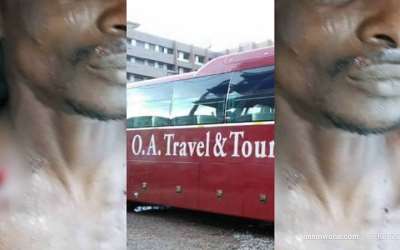 Information reaching Nsemwoha indicates an attempt to rob passengers of an OA bus with registration number GR 6989 – 14 by Five men believed to be Fulanis have been foiled by a police escort provided for the bus.

The bus which was heading to Bolgatanga from Accra was flagged down at gunpoint by five men aged between the ages of 25 and 30 years believed to be all Fulanis, two of whom were wielding shotguns.

The incident occurred at around 2 am Tuesday dawn at Alhassan Akura on the Kintampo-Buipe highway when the police escort named as Lance Corporal Andoh Francis shot into the suspected armed robbers when they attempted to rob the passengers of their valuables.

Lance Corporal Andoh reported the incident to Kadelso Police and on receipt of the information, the Kintampo Divisional command rushed to the scene and acting on intelligence arrested suspect Teitey Fulani aged 29 years with a gunshot wound on the right.

The suspect is receiving medical treatment while police are on the lookout for his accomplices.