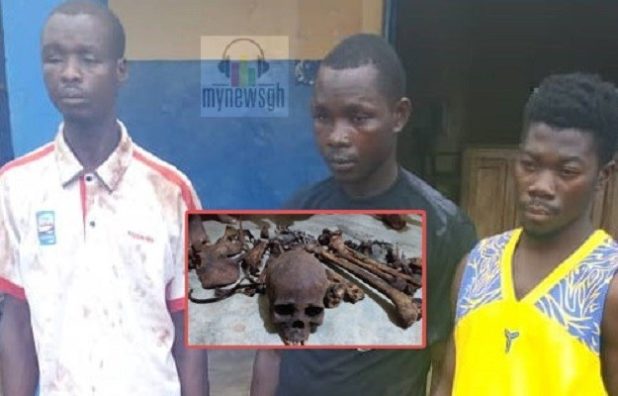 Police at Kukuom in the Asunafo South District of the Ahafo Region have confirmed to MyNewsGh.com that the body that was exhumed by three Sakawa boys from the Presbyterian cemetery was the mother of a chief in the area.

Kukuom District Police Commander, DSP Lawrence Adomberi disclosed that police are yet to take a statement from the Kontihene whose mother was buried some months ago but the body exhumed by the suspected ritualists earlier this week.

According to him, a Goaso Circuit Court presided over, Charles Kwasi Acheampong has since ordered that the body parts be handed over to the family for reburial.

It would be recalled that Peter Foh, 35, Yaw Yeridie, 31, and Berko Isaac, 30, were arrested at about 11 pm on Sunday with human parts at Abuom near Sankore.

Upon their arrest, they confessed to the police it was a female grave at the Aboum Presbyterian Cemetery that was exhumed, body parts taken and the concealed in a box.

It is unclear what they intended doing with the human parts but sources say they were planning to sell them to colleague ritualists.

The development is said to have thrown the entire town in a state of shock as this was among a few of the strange things to have happened in the area.

Police disclosed that all three will be arraigned before court and charged for the offence.