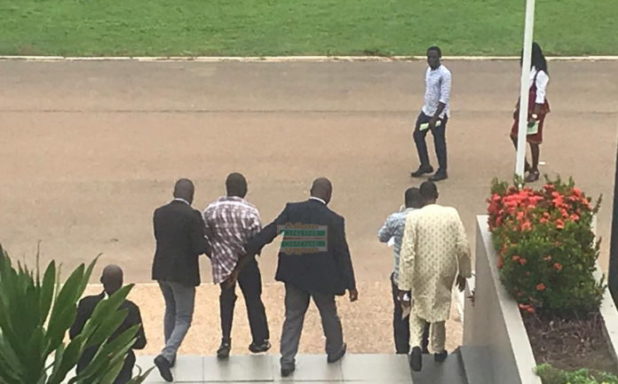 Member of Parliament (MP) for Kwesimintsim, Joseph Mensah, whose image was printed on the 35-year-old man who attempted to commit suicide in Ghana’s Parliament, Thursday afternoon, has broken his silence.

According to him, though he is bothered about the man’s conduct, he is not worried because he has not wronged him in anyway.

He said there are so many constituents he supports but has no knowledge of the man in question.

“I have received numerous calls from Ghana telling me that I am trending in Ghana only to find out later that a man came looking for me and threatened to kill himself. The fact is I don’t know the man. We have so many people who come to look for us for help and seriously I don’t know that particular man,” he said.

Mr Mensah said he is currently in Switzerland on an official parliamentary assignment and would officially speak on the matter when he arrives in the country next Week.

“I am currently out of town and would not want to make any comment on the issue because the police has taken charge of the matter,” he said on Accra based Neat FM monitored by Adomonline.com.

Mr Mensah further said if he is invited by the security for interrogation concerning the man’s conduct, he would accept it.

“I have not made any promise to this man. I’m not worried because I have not done anything bad to him. Besides, he also said he wanted to see the President and so if I torch down and I’m invited by security agencies, I don’t mind accepting it,” he noted.

It was a scary spectacle in Parliament on Thursday when a 35-year-old man attempted to commit suicide there. The man tried to jump from the Public Gallery into the Chamber of the House but was restrained by officers of the Parliamentary Protection Unit of the Ghana Police Service.

The man sat at the Public Gallery in a New Patriotic Party embossed T-shirt, with the picture of the MP for Kwesimintsim.

He was subsequently restrained by the security officers, who also arrested him. He has, meanwhile, been transferred to the Ministries Police Station.

BRIGHTWEBTV.COM/nana asare barimah File photo Listen to the Article A 25-year-old girl who is said …