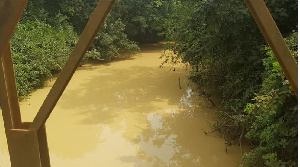 A picture of the current state of the Birim River

The Birim River is one of the main tributaries of the Pra River, flowing through most communities in the Eastern Region of Ghana from the Atiwa forest range.

The Birim River also flows north through the gap between this range and the Kwahu Plateau then runs roughly south-west until it joins the Pra.

The upsurge in a mad rush for gold over a decade ago led to thousands of illegal miners, including some foreign nationals, mostly Chinese, invading the gold deposit belt of the country to prospect for gold.

The phenomenon led to the pollution of the Birim River and other river bodies which used to be a major source of drinking water for millions of Ghanaians.

The Birim river has been degraded as a result of illegal mining activities.

The community members and some organizations have requested the government to take action against the illegal miners and protect the river.

The Ghana Water Company Limited (GWCL) earlier said the water is highly polluted, unwholesome and beyond treatment and any attempt to treat the water would be too expensive.

In 2017, the government waged a war against illegal mining, popularly called galamsey, placing a ban on the activities, having impounded mining equipment.

Previous Woman in sex tape not me, my vagina is smaller – Sista Afia
Next Sarkodie wowed by rap skills of Accra Academy student who raps just like him [ video]