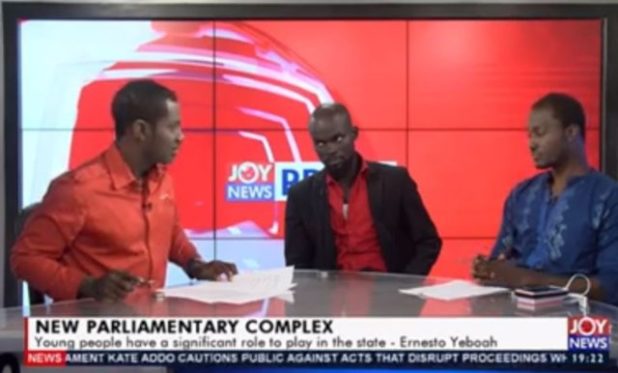 Three protesters who were arrested Friday morning for disrupting Parliamentary procedure have been released.

The three – Ernesto Kofi Yeboah, Abeiku Adams and a third who is yet to be identified – all members of pressure group Economic Fighters League, were released on bail by the Ministries police.

Mr. Yeboah and Mr. Adams told Joy News the police’s action during their arrest and subsequent move to the police station left a lot to be desired.

According to Mr. Adams, although he was cooperating with the police during his was arrested, he was still manhandled.

“The police turned the whole thing into a scuffle and they tore my suit in the process,” he said.

Mr Yeboah said he was dropped on the hard floor like a criminal and “when we asked the police for a medical form so we go to the hospital, they refused to give it to us.”

The protesters who are against plans to construct a new Parliament were arrested after screaming from the public gallery “drop that chamber.”

Mr Hammond made the comment during a discussion in Parliament on the new chamber plans.

His comment stirred the protesters seated in the public gallery who then began chanting “drop that chamber”.

Security personnel then moved in to remove and detain them at the Ministries Police Station.

The two were charged with offensive conduct under Criminal Code 207 (Act 30) for threatening, using abusive language and engaging in other conducts that breached public peace.

They are supposed to report to the police on Monday.

Watch to their interview with Joy News

Previous Video: Soldier allegedly locked up for campaigning against new chamber
Next “Parliamentarians will not sit under trees”- K.T Hammond charges