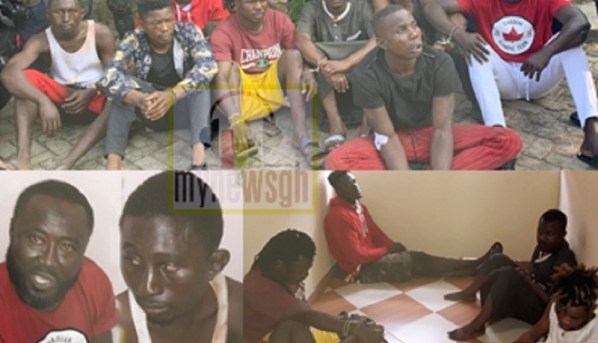 Security agencies have revealed the identities of the eight kidnappers said to have masterminded the kidnapping of two Canadian women who were on voluntary work at Kumasi, Capital of the Ashanti Region.

The suspect include Nigerians and their Ghanaian counterparts with who have all been arrested and are currently being interrogated at the headquarters of the Bureau of National Investigations (BNI).

Among the eight suspects contrary to earlier reports they were nine, include Asante Kotoko’s notorious supporter, Seidu Yakubu Mba,

According to the Minister of Information, Kojo Oppong Nkrumah who briefed the media a while ago covered by MyNewsGh.com, the crime was perpetrated by 5 Ghanaians and 3 Nigerians.

He revealed that a Nigerian is said to have led the whole exercise adding that no ransom was discussed on paid.

This portal understand that six of the suspects played key roles in the crime whereas two others played auxiliary roles.

The two Canadians Lauren Tilley and Bailey Chitty, 19 and 20 years respectively who were kidnapped last week were rescued on Wednesday dawn June 12, 2019 at Sawaba a suburb of Kumasi by a combined team of personnel from the police SWAT unit and National Security Operatives.

It is gathered that the driver of the vehicle used for the kidnapping who is a mechanic and one other person were first to have been arrested and led the security personnel to arrest the others.

Our sources reveal that the two victims are safe and have also been airlifted to Accra.

By:brightwebtv.com nana Asare barimah The taxi that killed five on the spot at Tegbi …