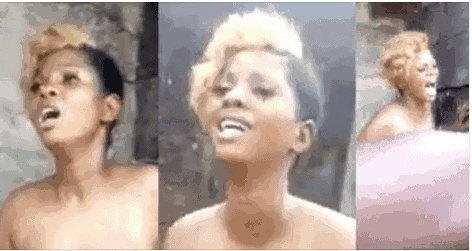 A beautiful young lady has been stripped and pepper inserted into her tonga by some angry men in the Benin City of Nigeria after she was accused of stealing a mobile phone.

The men who were poised to do everything and anything to retrieve their phone from the young lady whether she stole the phone or not undressed the lady with the help of another elderly woman who could even be the grandmother of the girl.
Lady abused for allegedly stealing a mobile phone

In the videos going viral on social media, they forced the fair lady to sit on the floor with her Tonga wide opened whiles another man insert hot pepper into it with no mercy.

She was abused and humiliated in the worse possible manner a woman can be humiliated by this angry youth who only suspected she has stolen a mobile phone.

Ever since the videos hit social media, the men who indulged in such a disgraceful manner have been condemned by every reasonable human being who has seen them.

The league of Patriotic Lawyers of Nigeria has also reacted to the video going viral. They are demanding the Edo State Commissioner of Police, Mr. Olusegun Odumosu finds the perpetrators of this heinous crime within 24 hours since their faces showed in the video.

Previous VIDEO: ‘I Went With Reverend Obofour To Beg Michy On My Behalf But She Snubbed Us’ — Shatta Wale Reveals
Next BREAKING NEWS: Legon student butchered by robbers