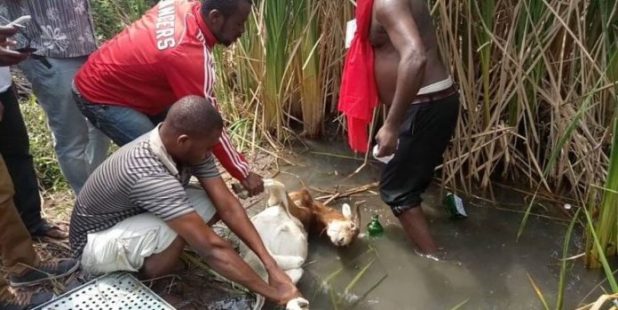 The customers who numbered about 9 prayed the gods to intervene and help them retrieve their locked up investments in the firm and the gov’t.
The act was performed in a bush.
“Nana, some Ghanaians have invested in a financial firm called Menzgold, but some government officials and the management of Menzgold have decided not to pay our dividends to us while the customers are suffering,” the leader of the group prayed in Twi.
The aggrieved customers went on to name Finance Minister, Ken Ofori Atta, SEC Boss, Rev Ogbamey Tetteh and some NPP leaders like Sammy Awuku, John Boadu, Freddy Blay, Nana B and the management of the gold dealership firm, Menzgold as part of the persons preventing them from getting their dividends.
Background
Menzgold was asked to suspend its gold trading operations with the public by the Securities and Exchange Commission (SEC).
According to the SEC, Menzgold has been dealing in the purchase and deposit of gold collectables from the public and issuing contracts with guaranteed returns with clients, without a valid license from the Commission.
This, the SEC said this was in contravention of “section 109 of Act 929 with consequences under section 2016 (I) of the same Act.”
The company was however cleared to continue its “other businesses of assaying, purchasing gold from small-scale miners and export of gold.”
Despite initial protests, Menzgold complied with the directive. It has however failed to fully pay its numerous aggrieved customers the value on their gold deposits as well as their entire investments.

By:brightwebtv.com nana Asare barimah   A 35-year-old woman has been arrested by the police at …