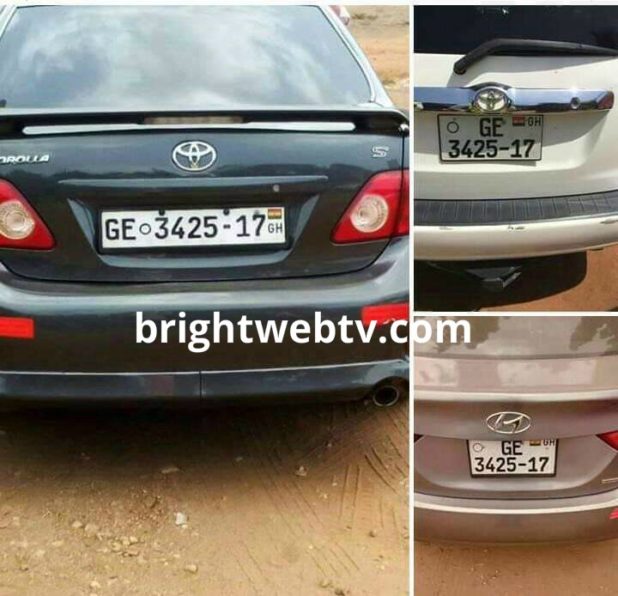 The Driver and Vehicle Licensing Authority (DVLA) says it has begun investigations into a case of two different cars allegedly possessing the same number plate.

A viral photo of two cars on Facebook showed that they both had the same number plate.

The source of the photo and the location it was taken at is unknown but other social media users have shared different photos of different cars using the same number plate, a situation that raises a major security concern when proven to be true.

The Public Relations Officer of the DVLA, Francis Tuffuor, in a Citi News interview said the Authority’s attention has been drawn to the viral photos and it is probing the issue.

“It has come to my attention of the news trending on some social media platforms that two vehicles have the same registration number. We are investigating the issue. Hopefully, by Monday we should get some information on it.”

All vehicles are supposed to have unique identification numbers, on their front and back plates but there are suggestions that some unscrupulous persons are producing fake plates that and selling to unsuspecting drivers.

On the return of Citi TV’s War Against Indiscipline, scores of drivers were arrested for having fake number plates and insurance stickers.

Recently, a junior doctor at the Greater Accra Regional Hospital broke down in tears on the Spintex Road after she was arrested for using a fake trade plate.

She claimed that she was one of several drivers who had fallen victim to ‘goro boys’; persons involved in the illegal business of issuing fake roadworthy and trade plates to the unsuspecting public.

An official of the Public Affairs Department of the Ghana Police Headquarters, ASP Simon Tenkuu warned the public to take personal responsibility for acquiring genuine licenses, plates and stickers.

WAI also nabbed high profiled staff of the Bank of Ghana, World Bank, SSNIT, lawyers and others in different security uniforms at the East Legon tunnel.

The Driver and Vehicle Licensing Authority last year announced that it will embark on a new electronic vehicle registration and documentation system targeted at vehicles with special number plates.

The exercise was geared towards eliminating fake customized registration number plates in the country.

The Public Relations Manager at the DVLA, Francis Asamoah Tuffuor told Citi News that many customized number plates found on some vehicles are not captured in their database as they are fake and not issued by DVLA officials.

He called on drivers with such number plates to contact the DVLA with their documents to have their number plates correctly done.