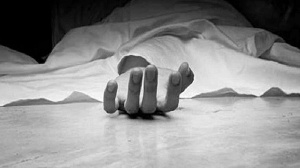 File photo: The woman is reported to have borrowed GHC1,500 to stake the lottery

A middle-aged woman, Maame Tina based in the Ashanti region has committed suicide after her hopes in making more money out of a lotto stake went bad.

The woman according to a report filed by Rainbow Radio’s Abdul Malik Anokye borrowed an amount of GHc1,500 cedis from her friend claiming her daughter has been admitted at the hospital and needed the money to pay for her medical bills.

However, she reportedly paid a self-imposed Mallam GHc500 cedis for two sure numbers and later used the remaining GHc1,000 cedis to stake the lotto.

But to her disappointment, the numbers she staked were not mentioned in the draw.

This our reporter said informed her decision to commit suicide because she said there was no way she could find the money to repay the main she took from the friend.

Madam Tina is said to have committed suicide by consuming a poisonous substance.