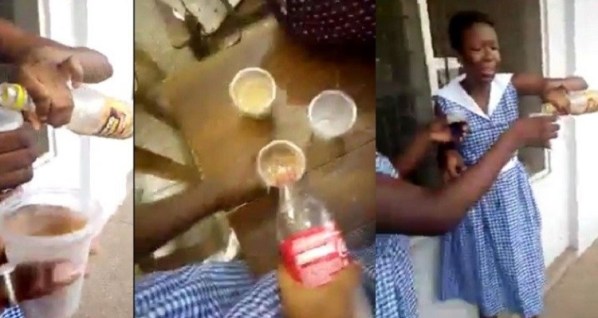 Some students of Our Lady of Apostles (OLA) Girls Senior High School (SHS) in the Volta Region who were recently caught drinking alcohol with impunity have landed themselves in a big trouble.

Sources at the Catholic School reveal that the suspected students face expulsion if the disciplinary committee which has been constituted to look into their conduct relating to the boozing spree finds them culpable.
Headmistress of the School, Madam Regina Coffie is not sure if those students caught in the viral video are still students of the school as she suspects they were those who just completed their final West African Senior Secondary Certificate Examination (WASSCE).

She disclosed even with that, it was against the code of conduct of the school especially when it was gathered that some of the students were drunk

MyNewsGh.com last week published a story based on the said video where the students seen holding plastic bottles of a local alcoholic beverage and mixing it with a soft drink while taking turns to serve themselves in a classroom with impunity.

The less than one-minute video exposed the teenage student girls in their ‘check’ uniforms conducting themselves in a manner that is an affront to the training being instilled in them by the Catholic Church and a violation of the laws of the school.

What is more shocking was how the drink found its way into the campus and later into the classroom where these girls considered to be innocent, were seen gulping it seeking to suggest it is not new to them.

In the video, they are overheard saying “you guys are drunkards…pour only small for me. Where is the coke? Mix am give me, mix am give me. It is a cure for stomach sore (ulcer)”