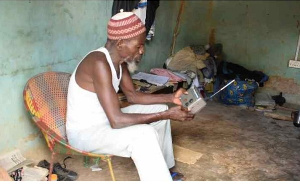 If it is about the question of how life is after retirement, then the expected answers from majority of workers who have retired from the public sector will not be pleasant. It stems from delayed payment of benefits to part payment of benefits or even none of the above. But the story of Mr. William Azure Akologo, a retired teacher from the Upper East Region will make you shed tears.

Mr. Azure retired as a teacher at the rank of Superintendent I from the Ghana Education Service after he was formally re-instated as a classroom teacher in 2003. He taught at several different schools at Nabdam for the past thirteen years without salary. Same way he had received nothing from SSNIT. Several attempts to rectify the problem by his employer were not fruitful until he went on retirement in December 2013.

In an interview with GBC URA Radio at Bolgatanga. Mr. Azure narrated that he depended solely on his wife, friends and co-teachers to survive while teaching but that did not discourage him from going into the classroom to teach.

Mr. Azure completed WA Teacher Training College in 1974 and taught for several years in the then Bolgatanga District. He vacated post in 1981 after Flt Lt. Jerry John Rawlings took back control of the country from Dr. Hilla Limann as Chairman of the Provisional National Defense Council on 31ST December, 1981. He was re-engaged as a classroom teacher on 1st September, 2003 following satisfactory reasons advanced for his vacation of post and subsequent desire to be re-engaged. He had since been at post until the then Ag. Regional Director of Education, one Mr. Emmanuel S. Zumakpeh, served a retirement letter to him.

A visit to Mr. Azure’s home at Kongo in the Nabdam District revealed the shocking skeletal life he lived; looking sick and wallowing in abject grief and poverty. His mustache and hair have fully gone grey amid an overwhelming distress. His single room was as dim as the glooms on his quieten face. He had nothing to show in the near-empty room except a radio set, an exhausted pillow, a left over student mattress spread under a mosquito net, about two old pairs of sandals, a tired bench, a bible and rosary, some old daily graphic newspapers and a few grains of reserved countable groundnuts and some few coins kept for emergency.

“I am suffering seriously. I prefer to die. My family was nearly thrown apart. You can imagine a man unable to feed, clothe and take care of his children in school. My boy was unable to complete Secondary School because I couldn’t afford for him to continue. So he is at home with me.” He narrated.

“The least said about the relationship between me and my wife for the past struggling years, the better. But I always look up to Mother Mary and Jesus Christ and say thank you for my life.” Mr. Azure wept.

Mr. Azure seems to be giving up the fight for his money because he has exhausted all the channels he thought he could. His travels to the Headquarters of GES and Controller and Accountants General Department are uncountable. He is gradually losing his sight because one of the eyes is damaged.

“The last school I taught before I went on retirement is Kongo Primary School and the current District Chief Executive for Nabdam, Agnes Anamoo, was my headmistress and she can testify my predicament. But I leave everything to God.” He concluded.