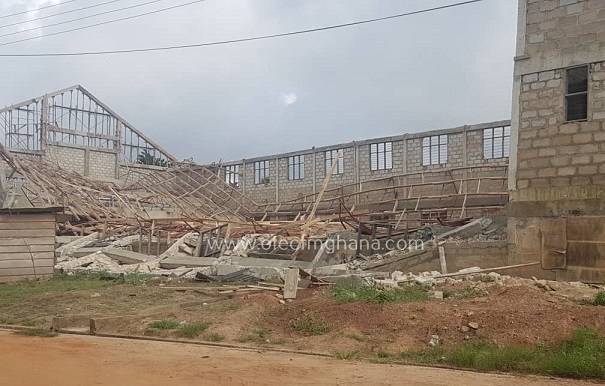 Collapsed Assembly Hall Of Jachie Pramso
The Jachie Pramso senior High School building meant to serve as the Assembly Hall under construction in the Bosomtwe District of the Ashanti Region collapsed in the early hours of Wednesday morning on 19th day of June 2019.

The project which is about 90 percent complete at the roofing stage and sponsored by the government , was lobbied by the Member of Parliament for the area, Dr. Yaw Osei Adutwum an old student and the Ashanti Regional Minister, Hon. Simon Osei Mensah.

Briefing OTEC, the Chairman of the School’s Parents Teachers Association, Mr. Paul Adusei Agyeman, and former Assembly Member for the area, disclosed the school established in 1970 has been without Assembly Hall and instead the dining hall has served for surch activities.

According to Mr Agyeman, he informed the contractor working on the project simply known as Mr Frimpong but he is yet to visit the area. All efforts by OTEC newsdesk for the contractor to speak on the issue was rebuffed by him.

The chairman said it was a fatal collapse which requires to be re-constructed. He stated further that as he lacked the technical know-how of the project he would not be in a position to explain the quality of the materials used by the contractor.

The Chairman assured parents of the safety of their wards as there was no casualty, adding there was no room to panic. The project, started about four months ago was expected to be completed by the end of the year.