Otumfuo endorses decision to convert all single-sex halls in KNUST

The Asantehene, Otumfuo Osei Tutu II has endorsed the decision to convert all single-sex halls in Kwame Nkrumah University of Science and Technology (KNUST) to unisex. 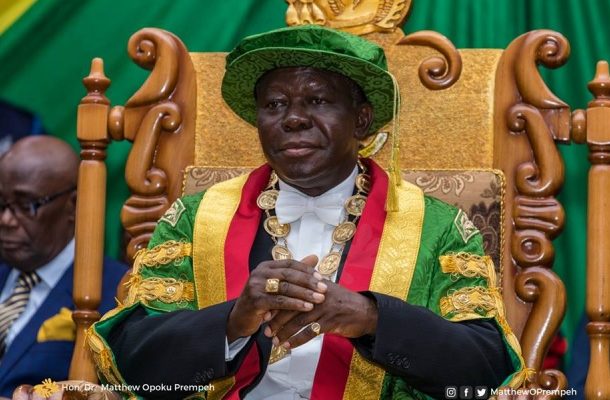 The King who doubles as the Chancellor of the school, reiterated that the decision to convert the halls was geared toward increasing the number of female enrolments, which should be promoted, Legon-based Univers News reports.

The Asantehene was speaking at the 2018 Special Congregation ceremony of the school.
“He noted that Ghana’s population stands in a ratio of 49:51 in favour of females,” a fact which he said cannot be ignored.
The Chancellor also asked for the decision to be supported by all stakeholders including the Alumni body, who have fiercely kicked against the conversion.
He also cautioned male students against hiding behind tradition to portray rowdy behaviour.
“Lewd male student behaviour in the presence of female students in the name of culture and traditions, is not justifiable under any circumstances. Any culture that is not dynamic dies,” he stated.
He said universities run on rules and regulations and thus all the students must make sure there is a tolerable environment for every member of the school community.
The decision to convert the halls was announced to the university community in6 January 2018 and since then alumni and residents of the all-male halls, University Hall, otherwise called Katanga and their rivals Unity Hall aka Conti have resisted the move.
The alumni filed a suit in court which is pending. An injunction filed by the plaintiffs to prevent the authorities from posting female students to the two previous all-male halls was thrown out.
The school authorities then proceeded to convert the halls and allocated first-year female students to the halls.
The Alumni, however, vowed to fight for the decision to be reversed.