Violence breaks up among students at Baba Yara stadium 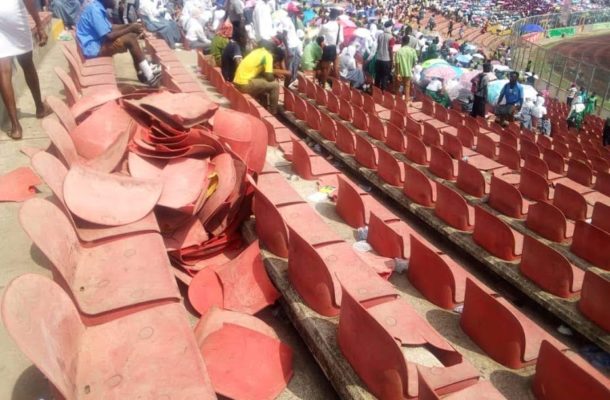 About 800 seats at the Baba Yara stadium have been broken with one student hospitalised following students violence at the 2019 Ashanti Region Super Zonal Athletic competition.

The Confusion between rioting students of Obuase Sec tech and Al Azhariya senior of school has overshadowed Thursday’s competition, leaving many of them with various degrees of injuries.

According to Brightwebtv.com correspondence at stadium, the trouble was orchestrated by a Students, who is alleged to have slapped a female student of Azhariya, leading to a response from a rampaging male students the Azhariya sides. 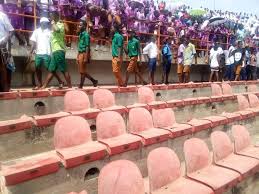 The fight escalated to the stands at the Amakom end of the stadium as many from either sides joined the Thursday afternoon pandemonium in an ugly crowd scenes that has marred the beauty of the competition.

“A female students on her way to buy food was slapped by a male student of Obuase Sec Tech, which led to a reprisal attack by the Azhariya boys after the information reached them,” Akapo Agoji said.

“This also brought a counter attack from other Obuase guys, leading to an open fights at the Baba Yara Stadium.

“So far about 800 seats have been destroyed”.

Students were seen fighting pitched battles with one another, as the broken chairs as missiles.

It took the intervention of the police and military to curb the situation after which more police have been called in to maintain peace and order at the stadium.

A female students of the Tafo-based Azhariya Senior High is reported to have been hospitalised after she collapsed in the process.