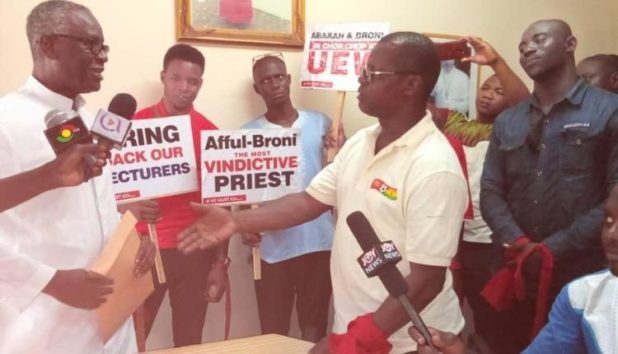 Aggrieved students and alumni of the University of Education, Winneba (UEW) have described the Vice Chancellor, Reverend Professor Anthony Afful-Broni as the most vindictive catholic priest they have ever seen threatening to petition the Papacy in Rome about his conduct.

According to the students who staged a demonstration this week, it is not possible for them to continue to contain the conduct of the Vice Chancellor who is not living a life worthy of a Catholic Priest and should resign or be sacked by President Nana Addo Dankwa Akufo-Addo.
In a petition Presented to the Metropolitan Archbishop of Cape Coast Most Rev. Gabriel Charles Palmer Buckle through the Vicar General of Archdiocese Very Rev Father Bonaventure Annan, they vowed to go as far as Rome to ensure Father Afful-Broni leave sthe UEW in Peace

Meanwhile, the Central Regional Coordinator of Concerned Students and Alumni of UEW, Mr. Kofi Ashia who presented the petition on behalf of the students expressed concerned about the UEW which has been in the news for all the bad reasons and believed something must be done as soon as possible to salvage the University from its current woes.

He stated that the VC was tasked by President Nana Addo to set the University on the path of reconciliation, a simple task which the VC has gloriously failed to achieve.

Mr. Ashia accused Vice Chancellor of pursuing a path of absurd victimization and grandiose self-pontification which has led to the dismissal, termination of appointment of unwarranted transfer of about 30 staff of the University.

According to him, the epitome being the recent dismissal of Dr. Frimpong Duku and Professor Ephraim Avea Nsoh and the termination of appointment of Dr. Emmanuel Osei Sarpong which were premised on highly frivolous charges and sparked protest amongst the agitated student body.