Doctors at the theatres of the premier hospital say each of the affected children needs a repair or a replacement of the throat (the food pipe) which has been seriously damaged by the corrosive substance.

“In fact, it’s becoming very rampant. It’s assuming an alarming proportion and I think something has to be done to curtail it; otherwise, we would have a very big challenge on our hands. Every week, we have one or two children coming with a burnt throat after mistakenly drinking caustic soda. Occasionally we get adults also. The caustic soda, as it is, once it is dissolved, is as clear as water. It’s colourless; it’s odourless. The worst thing is that they store it in these water bottles and mineral water bottles.

“So, even as an adult when you see it and you are not told that it’s caustic soda, you might mistake it to be water and you will drink it. It’s a very dangerous thing. The earlier something is done about it, the better. The authorities should come in and regulate access to this substance because it shouldn’t be sold on the market like that,” a paediatric surgeon at the hospital, Dr Michael Amoah, told Starr News.

Meanwhile, a Ghanaian musician, Afari Gyan, is raising funds in the streets for one of the children who misidentified caustic soda for drinking water whilst his parents were away.

Abdul-Hakeem Apaliwe, 3, returned home from school with his elder sister and, thirsty on arrival, gulped some amount of the toxic substance stored in a bottle by a local soap manufacturer in the neighbourhood.

That was the last time he drank water or took in any food by mouth. His throat got so impaired by the caustic liquid he now has trouble swallowing even his own saliva. He is being fed through a gastrostomy tube inserted into his stomach through a small cut in the abdomen. He needs about Gh¢15,000 for a repair of the damaged food pipe.

The injured boy now has trouble taking in food or water by mouth. He is being fed through a gastrostomy tube inserted into his stomach.
“Initially the plan was to do surgery because the nature of his injury was so bad that we couldn’t even do the dilatation. I went for some training from a Belgian professor who taught me some skills and techniques of how to handle some of these difficult injuries.

“I’ve been able to do the dilatation for him, though we’ve not finished, we’ve not reached the target. The parents do not have anything. Anytime they come, I have to find money to pay for the boy, including doing a surgery on his hand because he had some swellings on the right upper limb, because we had to remove those swellings on him as well,” said Dr Amoah.

Efforts to get the amount, the equivalent of 2,812 United States dollars, are a ‘mountain to climb’ for his perturbed poor parents on a continent where, as observers say, it is much easier to raise funds for a beauty contest than it is to mobilise money to bail out a dying child. 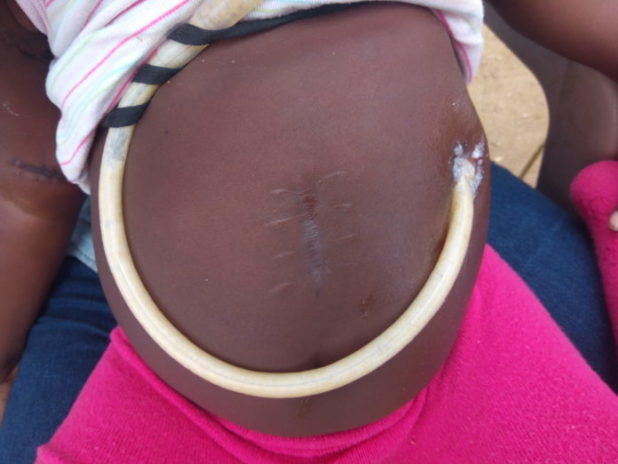 Musician Trusting his Popularity to Raise Fund for Injured Boy

The gospel singer saw the boy’s struggle and, recognising the limited distance his low-class parents could travel on their own in search of help when he came across them, urged the distressed couple to not ‘give up’ but to ‘start up’ a rare campaign with him.

The south-based artiste suspended his regular music-related engagements and, moving from the studio to the street, launched a nationwide street fundraising tour to save the boy. He has been everywhere—including the north where the boy’s parents hail from— since the tour began about a month ago. He is using his own electronic sound system for the street appeal and he is counting on his fame as a musician to win the hearts of the public for the injured child.

“His mother is from Bolga here and his father is from Paga. I am from Sunyani. I’m helping them. They don’t have anybody. I met them the way you met me here. I met them in Sunyani and the father told me that they were coming from Kumasi for help.

“They asked if I could help them. I said I don’t have money but I said I would go round and beg for help for the boy. I go round with them. For about one month [so far] we have gotten Gh¢3,000 for the boy. We are still looking for Gh¢12,000. This is the problem. We need help,” Gyan told Starr News in Bolgatanga, the Upper East regional capital.

He added: “At times, I use the morning hours to attend to my business, to sell my CDs; then, I spend the rest of the day on the fundraising travels.”

The boy’s mother is no longer part of the tour. She bore a child just three weeks ago and had to take a break from the extra burden of the indefinite fundraising trips for her son whilst she was also heavy with another child.

“I’m a poor farmer. I’m begging everybody in Ghana to think of God and help my child out of this problem. I don’t have any help from anywhere. I have nowhere to take my problem to. I’m tired. I need help from any human being,” the father to the ailing boy pleaded desperately in an interview with Starr News.