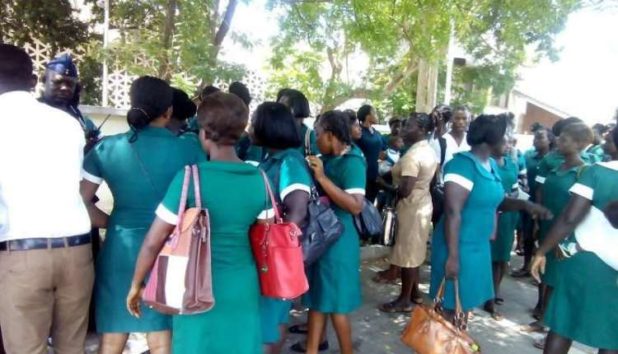 Nurses at the West Gonja Hospital in the Savannah Regional capital of Damongo have announced a sit down strike over salary discrepancies starting today Monday 1st July 2019.

Chairman of the Ghana Registered Nurses and Midwives Association who confirmed their decision o Bole-based Nkiligi Fm monitored by MyNewsGh.com, said management of the hospital promised to meet their demands which made them to suspend an earlier strike which was scheduled for 13th June 2019.

According to him, the Nurses at the facility reached an agreement with management for a 10% basic salary allowances due them starting from January 2019 which the hospital failed to pay despite promising to use four weeks to address the issue.

He also raised the issue of denial of study leave by management of the hospital citing instances where nurses have been denied study leave simply because authorities see no relevance in the course of study they chose.

“The Nurses at the West Gonja Hospital sees the act to be an attempt by management of the hospital to stifle career choices and progression of staff of the hospital”; he said while adding that their promotions have been frozen.

They are therefore calling for the immediate removal of the administrator and the Matron of the hospital with immediate effect since according to the Nurses, they are the major cause of the problems in the hospital.

A petition has since been forwarded to the Catholic Bishop of Damongo Catholic diocese, the Savannah Regional Minister, the DCE for West Gonja and others relevant bodies insisting their action is not meant to create enmity between them and their patients but simply demanding what is due them as workers.