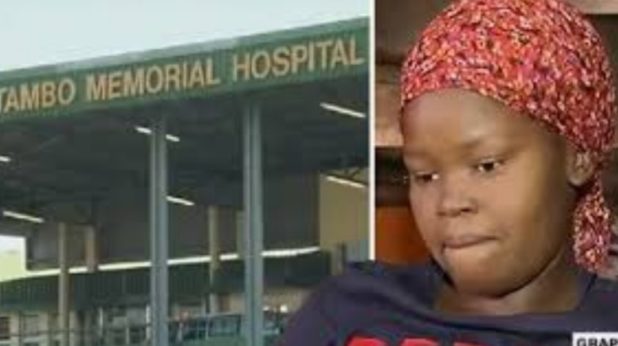 A teenage mother has been left devastated after her baby’s head was decapitated while giving birth.
Kagiso Kgatla, 19, was just six months pregnant when she suffered the traumatic delivery and lost her child in Tambo Memorial Hospital, in Boksburg, South Africa.
She reportedly had to wait another 24 hours before the rest of her baby’s body could be removed from her womb.

Kagiso is now planning to sue the doctors involved and is demanding answers over the botched birth as she struggles to come to terms with her ordeal.

She told eNCA: ‘A doctor came and said I should push. I pushed and pushed. Nothing. ‘He inserted his hands and said I should try again but still there was nothing. ‘He also said he could see the baby’s head. Then he asked for those big spoons. ‘That’s when my baby’s head came out, but only the head. ‘The body remained inside.’ The foetus had a heartbeat before the delivery, eNCA reported. She told the news channel through tears: ‘I am not okay. I am not coping at all. ‘I think they must be jailed, they should… for what they put me through.’

Kagiso said doctors had told her that the baby was likely to suffer from some abnormalities but she was still willing to care for the child and went ahead with the pregnancy.
Reportedly medics warned her that her unborn child only had a ‘very small chance’ of living.

SEE» Afia Schwar and Owusu Bempah reunites after quarrelling for years
But she told eNCA that she didn’t understand that the child was likely to die within hours of giving birth.
Head of obstetrics at the hospital, Dr Gilbert Anyetei, said: ‘Normally, when the head is not crowning we assist. We call it assisted delivery. ‘In this particular instance the head popped out on its own and we tried to see if the rest of the body would follow, but the rest of the body didn’t follow.’

The Gauteng health department has launched an investigation into the circumstances around the delivery.

In March 2014, a similar incident occurred when a Scottish woman delivered a baby whose head was left inside her during labour at Ninewells Hospital in Dundee, Scotland.

The Medical Practitioners Tribunal Service ruled that consultant gynaecologist Dr Vaishnavy Laxman made an error in not attempting the delivery by C-section. Two other doctors carried a C-section on the woman, following the incident, to remove the infant’s head.

It was ‘re-attached’ to his body so his mother could hold him before she said goodbye.

Tags birth gives inside trapped while